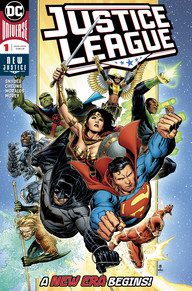 There is a lot to unpack in this first issue because there is a lot to this story. What also adds to it is that there is an unknown force barreling towards the Earth that can be witnessed across time and space. Back on Earth, we are given our first tour of the newly opened Hall of Justice in Washington D.C. and given our first lesson in how not all of it is as “open” as one would think. What I really love about this opening of the series is how reminiscent it is of the Justice League Unlimited series, even in the background images of the heroes costumes on display. There is a great level of detail used in this issue by Cheung and it does not go unnoticed.

As for the League itself, teams of heroes are facing down a series of attacks all over the world that all seem to be leading back to one person; Vandal Savage. His fingerprints are all over this plan and Martian Manhunter is doing everything he can to keep the team together and focused as they try and stop the threat. There is some great banter between these heroes and the long-standing relationships they have with each other makes those moments seem genuine. It’s great to see this team in action and this roster is great as well. If there was one thing that didn’t get explored in this first issue, it was the trinity of Batman, Superman and Wonder Woman and that actually worked out in this issue’s favor.

Concentrating the bulk of the story and exposition on Martian Manhunter and later, Lex Luthor gave the story a great sense of focus. It took the burden off the hands of characters that we expect to lead a narrative and allows for the focus to be on this bigger story forming around them. The juxtaposition between the League’s deliberations about this incoming entity heading their way and Luthor’s reaction creates some great dramatic tension, especially knowing that Luthor seems to know more than he’s letting on. There is a really interesting mystery forming in this book and I can’t wait to see where it goes.