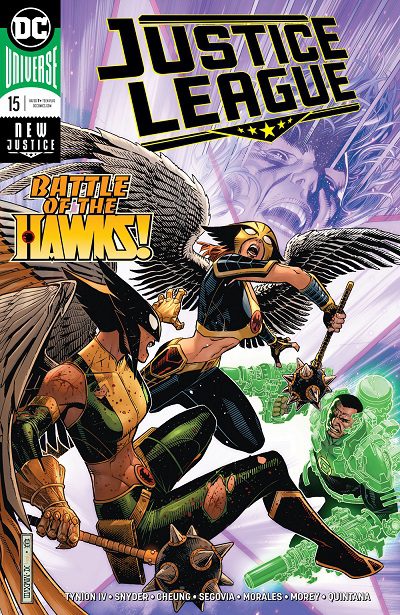 The team of Thanagar Prime has to find a way to escape Shayera and rest of the Hawks before she uses Katar Hol to murder them all. Shayera will do whatever she has to in order to keep the secrets of Thanagar and they are secrets she’s willing to kill for. Unfortunately for the team, they are secrets that are being protected by more than just the Thanagarians. When John Stewart, Kendra and Martian Manhunter break into the vault to find the Martian Keep, they discover that the conspiracy to protect Thanagar also includes connections to the Dominators and the Green Lantern Corps.

There is an awesome interlude in this issue that explains the reasoning behind this alliance, who it is against and why.

Back on Earth, the Trinity has a problem of its own when Starman’s powers begin to surge. Powers that threaten to destroy everything around him, including the Hall of Justice. As Wonder Woman and Superman struggle to contain him, the being tells them that something is coming. Someone they’ve never faced before. The Martian Keep begins to relay the same story to J’onn along with revealing the secret of Thanagar Prime.

This was an absolutely brilliant issue. It not only ramps up the drama and intrigue that has been building since the rupture of the Source Wall and the discovery of the Totality, but it also sets the stage for some new and unimaginable stories to come. Snyder and Tynion IV are masters at telling a huge story that still emphasizes character above everything. That is showcased here not only in J’onn’s struggle and John Stewart’s new power set, but also in Shayera’s motivations for the actions she takes for Thanagar Prime. As big and wide-ranging as this story is becoming, it still takes the time to focus on characters and their personal/ interpersonal conflicts.

Jim Cheung and Stephen Segovia knock it out of the park with the visual in this issue. Not only are the characters drawn with dramatic beauty, but there is a fluidity to how they look on the page, like they are in motion and action throughout. The backgrounds are amazing and one of my favorite panels of this issue is the amazingly detailed depiction of the Thanagarian Vault.