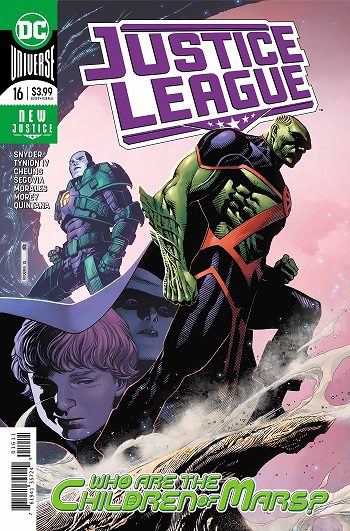 The battle within the Thanagarian vault continues as Manhunter finally gets answers from the Martian Keep.

With the rest of the heroes fighting Shayera, Katar and the forces of Thanagar, John Stewart has to deal with how his actions look to the Green Lantern Corps, specifically Killowog. It’s a great scene that shows that John is not as above it all as he has been trying to be and he finally comes to a realization that he shares with his friend.

In the course of finding out about Perpetua and the other secrets that are being hidden about the source wall and the universe before our own, Martian Manhunter learns that there is a hidden chapter to his own life that might hold answers. It’s a really intense moment for the character and the story itself because it connects J’onn to the events to come.

As the Keep continues her story and reveals her ultimate fate, Shayera is forced to deal with the reality of her schemes. J’onn is flooded with the memories of the Keep and Starman finally emerges with a plan to save the universe and repair the Source Wall.

There is so much going on in this story that it is easy to get lost in how massive it is becoming. Thankfully, Scott Snyder and James Tynion IV are keeping the growing tension and expanding story centered on the characters being affected by it. Filtering the bigger aspects of the narrative through engaging moments with J’onn and others allows the reader to feel that there is a very real impact to the events that are unfolding. It’s a testament to great writing that each turn of the page is anticipated with new and compelling reveals.

The art by Jim Cheung and Stephen Segovia is amazing. There are so many beautifully detailed panels in this issue that every page has something that could be a print hanging on the wall.