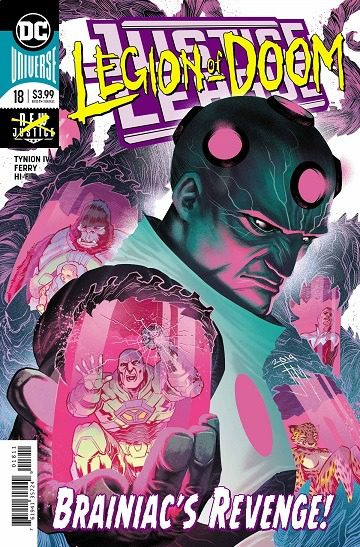 Lex Luthor and Brainiac must have a meeting of the minds in order to uncover the mystery of Perpetua.

After using the device he designed to bring Lex into his mind to share information, Brainiac admits to his actual plan. He plans to take over Lex’s mind, continuing running the Legion and bide his time until he can find a way to control Perpetua as well.

Lex offers to give Brainiac everything he has, but first, the villain needs to listen to a story. The story of Vandal Savage and why Lex decided to kill him. It’s a tale that spans time, space and imagination. It also touches on the seminal events that made Lex the man that he is.

Both villains find themselves at a moment of truth and the next step in their plan will come with an unexpected revelation.

James Tynion IV has a great sense of who these characters are and why we should care about them. It’s a difficult task getting an audience to both empathize with and follow along with the villains, but Tynion IV creates a very human story for Lex in this issue. A story that is both compelling and engaging to both the reader and Brainiac.

Pasqual Ferry’s art is good. There isn’t much variation in style, but there are really well done moments especially the ones between Lex and Brainiac.