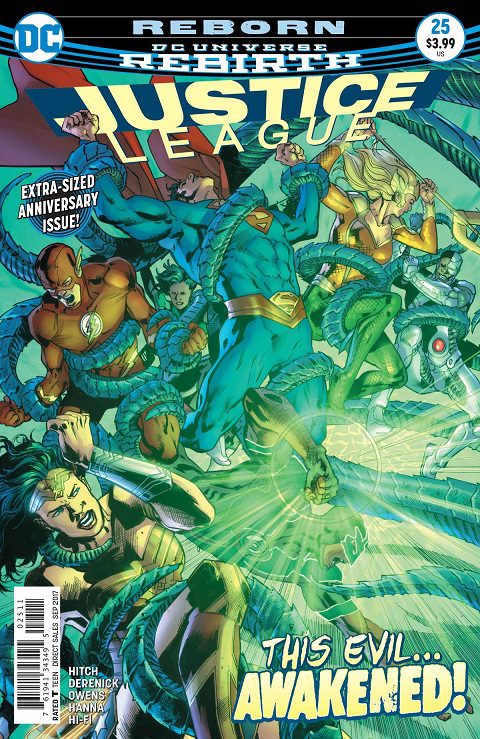 The issue opens with the narrator recounting a bloody and violent battle against a tyrant named Shirak. A battle that involved the entire Green Lantern corps against billions of zombie followers. The narrator tells the account to Batman in order to prepare him for what is coming. Meanwhile, Simon and Cyborg are in Detroit when a mystery illness causes one of the teachers to take a member of his class hostage. As Vic tries to calm the man, he is told that there are voices compelling him to his actions. Voices commanding him to make a sacrifice. As Cyborg and Simon clear the children from the location, Simon’s ring warns him of an active object right before a giant dome appears over part of the city. 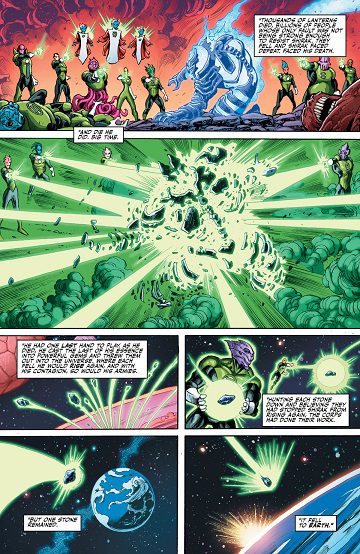 Meanwhile, Batman continues to get his lesson in the history of the DCU as connections are made between Crisis, Flashpoint and other events that have reshaped the universe. What’s more disturbing is that he is told that they are all symptoms of something bigger. Back in Detroit, Shirak is resurrected and instead of having the backup of the entire corps at his side, Simon is forced to face him alone. As Shirak continues to monolog, the rest of the League arrives to take him down. As the League battles against Shirk and his attempts to absorb them, Simon steps up to take on the creature again. As the League fights back, Batman is confronted with an ominous message that might mean the end of everything as he knows it.

This issue of Justice League is well done in my opinion. Hitch really impressed with the both parts of the storyline in this issue. As much as I enjoyed the physical threat presented by Shirak, I also enjoyed the psychological game being played out with Batman. The art is well done and Derenick really allowed for the each member of the League to have their moment action wise. It was also gratifying to see the growth in Simon as a character.