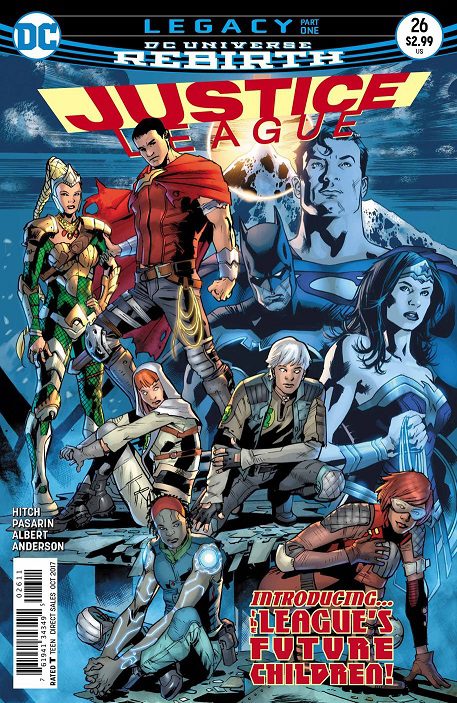 Twenty years from today, Earth, and specifically New York City will look a lot different. Amidst the rubble and ruin, a mountain sits in the middle of the city and a group of young heroes are doing their best to move towards it without being seen by an entity known as “The Sovereign”. As they prepare to move in, they are confronted by a twisted version of Aquaman known only as “Curry”. He begins to fight the young heroes, but not to kill them apparently. He’s trying to keep them from an even worse fate. As they beat him back and escape, you get a glimpse of the danger that awaits them. As they make their way to the heart of a building that they all remember, they are given an automated message telling them they have one chance to fix the world as The Sovereign appears.

It’s clear that the young heroes are no match for her power and they do their best to fight her to a stalemate in order to escape. In the present, the Justice 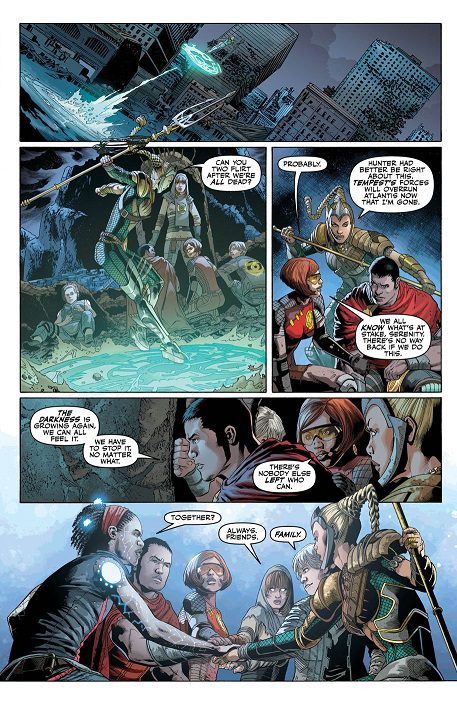 League is investigating a city full of people who have seemingly killed each other en masse. As they view the destruction, Wonder Woman laments her inability to end the violence that takes over humanity. Superman tries to explain to Diana about the example that they are there to set. Just then, the heroes from the future appear and confront the Justice League with who they are and the hand that the League plays in the destruction of the future.

From a plot perspective, there were very few surprises with this issue. The road it was leading me down as a reader was a little predictable, but I am interested to see where it goes next. The notion of who these heroes are and their relation to the current members of the League is going to be strange to see played out and I fear that Hitch won’t have enough time to flesh out their stories before diving back into the overall arc, but I’m at least willing to read the next issue. Pasarin’s art works well for the group shots and close ups, but there wasn’t a lot of action that held my interest even in the fights with both Curry and the Sovereign.