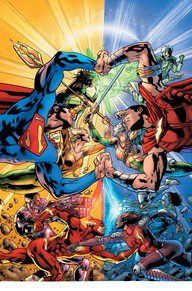 The children of the Justice League continue to confront their parents with information about their lives and every part of it seems too convenient. The almost immediate acceptance and invitation to these strangers from the future claiming to be their children is hard to wrap my mind around because no one is really questioning anything. The kid’s story is compelling, especially the one between Hunter and Wonder Woman, but everything that is not being said in the panels seems more interesting than what I’m seeing on the page. 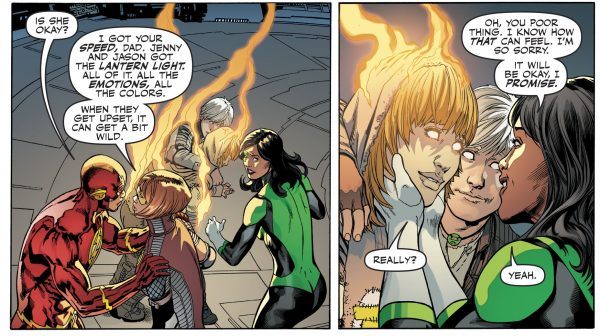 As they continue to tell their story, the stakes don’t seem to be raised that much. At the end, the best anyone can say is Mera stating “Well, That’s a lot to take in.” Is it? They really didn’t explain anything and only gave a self-serving story designed to elicit sympathy. No one is asking questions. No one is investigating their claims because the one person who would be skeptical is not there. Also, having Diana skulking in the background with her head down doesn’t feel right. It doesn’t fit with the character and I found myself rolling my eyes every time I was meant to feel for her. 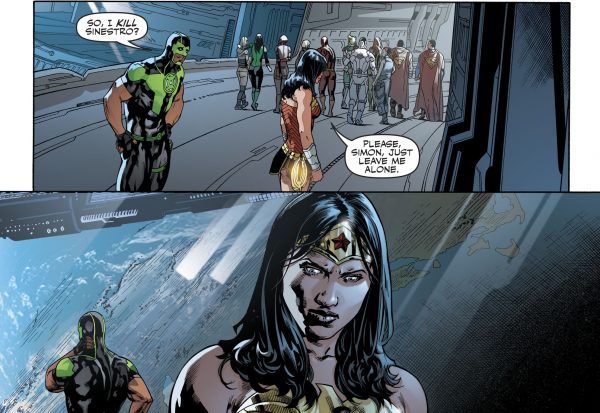 I don’t really know where this story is meant to go, but it needs to find a way to get there sooner. The logic and tonal issues with this story stretch credibility to a degree. These heroes cannot be this naive to just freely accept strangers claiming to be from the future and, more importantly, be their children. It just feels like everything on the fringe of this story is more compelling than what is being presented. The art is good, but there isn’t much to work with story wise to give the art anything compelling to express.