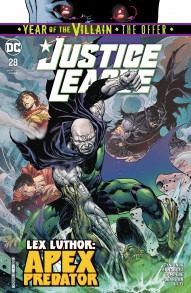 Manhunter and Hawkgirl are tracking Lex through the desert and Kendra wants to tell the rest of the team. J’onn keeps things close to the vest and when Lex contacts him telepathically, he tells him that he will reveal himself if he puts Kendra to sleep and follows him. What follows is Lex’s version of the offer he’s making others to J’onn and the Martian realizing that Lex revealing everything he is planning is a 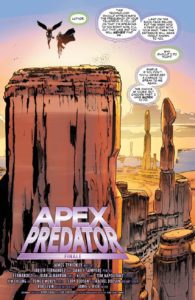 trap he won’t be able to escape.

At the same time, the Justice League have made their way to Qward. In their quest to find the Anti-Monitor, they discover a slaughter on the planet. A slaughter that will leave a message to the children of Perpetua. When the Legion of Doom arrives, the League discovers that their presence is a distraction from something more sinister coming their way.

The story is getting deeper and more compelling with each phase and James Tynion IV does an amazing job of moving the bigger story forward as well as making the characters the focus of the story. The Lex/J’onn dynamic is great. The fact that these two characters and their connection forms the backbone of this story continues to be engaging to the reader. The issue ends with a thrilling cliffhanger and I can’t wait to see where this story goes next.

Javier Fernandez and Daniel Sampere deliver some beautiful, dynamic and action filled art throughout this issue.