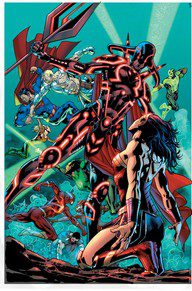 We have finally come to the conclusion of the Legacy story involving the future children of the League and their war against the Sovereign (Hippolyta). As the evil force that has taken possession of Diana and the rest of the League convinces the heroes to kill everyone, the children of the League, as well as a newly redeemed future Aquaman, try and hold them back to allow the military forces led by Steve Trevor to escape. Both sides continue to battle with the kids trying to convince their parents to break free from the force controlling them.

As the battle seemingly gets worse for the children, Batman dives in to disable Superman and press the advantage. Arthur steps in to save his daughter from Mera and the pair have a

moment before Mera skewers him with his trident. As the darkness continues to surround them, Sovereign relays the truth to Diana’s son about why he was abandoned and what his existence means for the darkness trying to overtake them.

This was a really good conclusion to a story. My problem is that NONE of the emotional threads that were laid out in this issue were ever present in the previous ones. At no point was there any indication that Diana’s son was important to the overall story. No indication in the previous issues that there was a connection between the Sovereign and the darkness. No real motive as to why the Sovereign was the bad guy in the first place. There just seems to be gaps in the narrative that are maddening to someone who has been reading this story and wondering why.