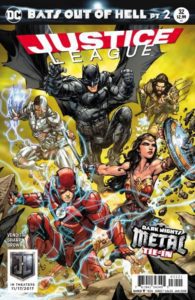 “Bats Out of Hell Part Two”

Cyborg is in trouble. After his encounter with the Dark Multiverse version of himself and the other Batmen, he is barely clinging to life and his teammates are not faring much better. Each member of the Justice League is trapped in a nightmare version of the Batcave with their Dark Multiverse alter-ego. Beneath Central City, Flash faces off against The Red Death across what looks like a series of sand dunes. Aquaman finds himself deep below Amnesty Bay facing off against The Drowned and a creature that Arthur dare not hurt. In Washington D.C., Diana squares off against The Merciless but refuses to fight his way. 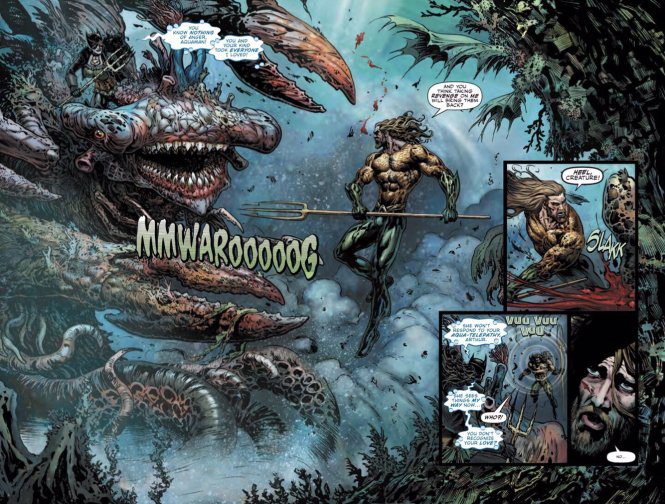 Hal finds himself at the mercy of The Dawnbreaker in a cave where there is no light save for the one generated by Batman’s ring. As each member of the League fights to survive their encounters with the Dark Knights, Victor has his own struggles in the clutches of The Batman Who Laughs. He is desperate to find a way to unite his team. He is struggling to find a way to communicate to them in order to help them a more importantly, to find a way to tell them why they’re being targeted the way they are.

Many of the stories outside of Metal can be hit or miss and this one really helps to move the overall story along while adding some threads that fill in some of the story gaps. Venditti raises the stakes for the League, especially Cyborg in this issue and they’re confrontations with the Dark Knights have more resonance. I enjoy how each cave is designed for both physical and psychological attack and the strategic mind of Bruce Wayne makes them a bigger threat. Sharp’s artwork is stark, adding to the darkness and menace of the overall story. Definitely, has me interested in seeing what’s next.