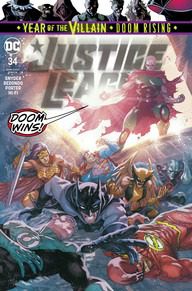 All of the players are on the board and the universe is on the tipping point of choosing between Justice and Doom.

In the past, Cheetah and her team attack Atlantis with the powers of Poseidon in order to get the fragment of the Totality. Complicating matters is that the Justice Society, Green Lantern, Flash and Aquaman are facing off against Vandal Savage and his team who want to prevent them from using the fragment to open a portal.

In the future, the rest of the League are trapped by Brainiac and it will take Kamandi gathering heroes from across the multiverse to take on the ultimate version of the villain.

At the same time, Starman reaches out to his counterparts across time and the multiverse to augment the powers of the Monitors in order to stop Perpetua. All they need is for Kendra to be ready at the moment they need her. A prospect that is easier said than done with the hero full of rage and mourning and targeting Luthor for death.

Scott Snyder is a master at bringing the audience on a ride as a reader. There are ups and down in this issue that both Snyder and Tynion IV have crafted to bring out emotion from the reader and this issue pulls no punches bringing you to the brink of emotion at several points. I was impressed with this story and the characters and can’t wait to see how it concludes.

Redondo and Porter nail the tone of this story with the art. Everything is filled with detail, gravity and energy.