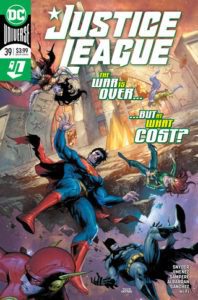 Colors by Alejandro Sanchez and Hi-Fi

Martian Manhunter is free and prepares to unite the world in opposition to Perpetua and Lex Luthor. But is it too late to turn the tide of Doom back to Justice?

As the Totality begins to change, the heroes double their efforts to fight back, but Perpetua is more clever than any one of them believed and her appeal has unexpected consequences. Consequences that will find the heroes apart from reality and faced with the prospect of one final fight for the multiverse.

Scott Snyder is a master at bringing a story to heights of adventure and tension and then subverting the reader’s expectations in ways that are both maddening and satisfying. This story takes the reader on an emotional rollercoaster only to let them off with a sense of both wonder and anticipation. It’s a testament to the detailed and beautifully laid out plot that the end of the story only makes you hungry for more. A great read with an ending that screams of surprise and uncertainty.

Jimenez, Sampere, and Albarran bring the story to life with vibrant, energetic art that perfectly captures the tone of the plot. Jimenez brings energy to the battle against Perpetua and both Sampere and Albarran bring a somber reality to its aftermath as the heroes find themselves facing the unknown in a universe of shadow and possibility.