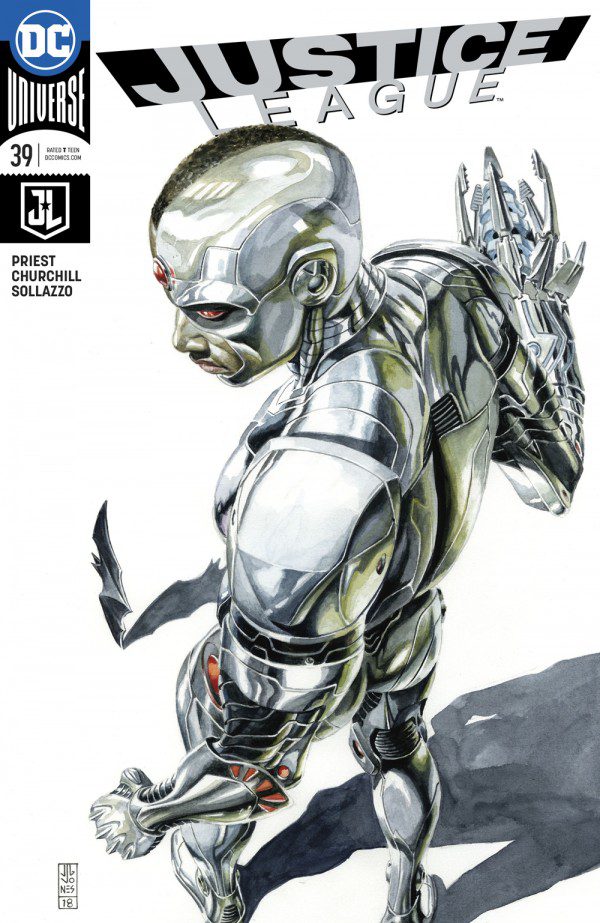 Aquaman finds himself on the run across the desert. He’s being chased by mercs but takes them down with the help of The Fan. He informs Arthur that he is the one problem that the League can’t solve as he hands Arthur a new suit that will keep him hydrated until Simon can reach his location. When the Green Lantern arrives, he worries that the dead mercs will be the wrong optics for the team and Arthur doesn’t care. He also doesn’t care about Simon worrying about a dinner with Superman.

At the House of Representatives, the chairman of the committee investigating the League is waiting for their chairman and are surprised to see that it is Cyborg. He introduces himself to his lawyer as the Justice League of America springs into action to help rescue people trapped in the vicinity of a derailed train carrying chemicals that could be devastating if they are released. Victor continues to testify before the committee and there is a panel showing the assorted Batmen around the capitol building that is visually fun and funny.  Meanwhile, Jessica is beating herself up over a choice she made before Batman left the League.

As Victor leaves with the attorney, he finds that there are deeper implications to the hearings than he thought. He also finds someone in the gallery that needs his help. An old friend. Meanwhile, the teams converge on the area to try to stop the release of the chemicals. juxtaposed with the action in the panels are some social media posts that are pretty good representations of current social media culture.

I like the social media aspects of this issue and the implications that there are real-life forces aligned against the League. This was an interesting continuation of the current story, but there are moments in it where I wished the narrative would get back to The Fan. If his story is so compelling (and in many ways it is), why are we spending so much time on the fluff surrounding that story? Side stories are fine and these are well done, but the pacing of them takes the focus from the main story that’s been building to the point where it becomes lost in the shuffle.