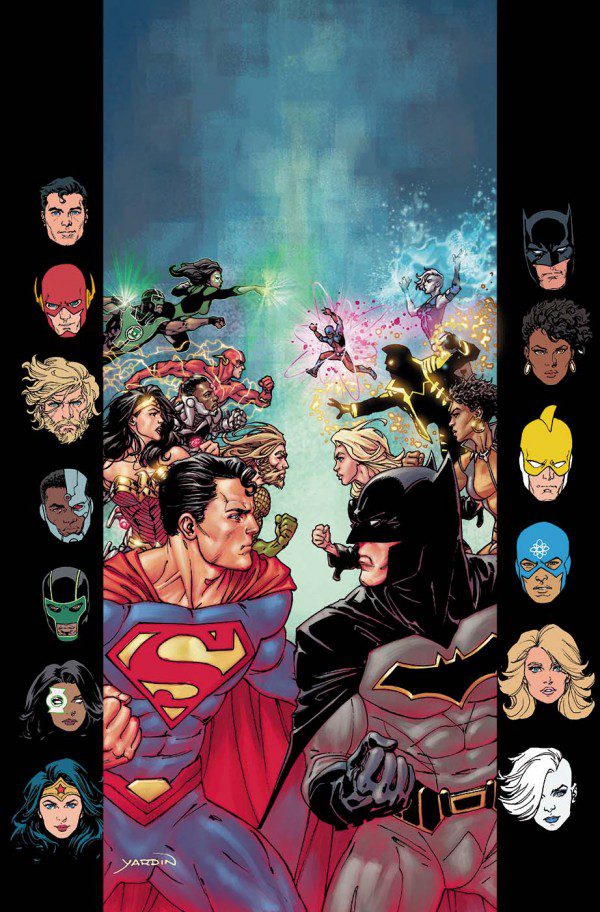 Cyborg has transported down to the surface and he looks a little different. Taking the new changes in stride, he conveys to the team that their latest mission is causing some issues with the locals, specifically the fact that they seemed to concentrate on the more affluent part of the town first in their efforts to contain the damage from the train derailment.

On the Watchtower, there’s another problem. An agent of The Fan has infiltrated the station and jettisoned all of the functions keeping it in space. After running into Aquaman, she manages to escape just as the combined teams of the Justice League and the JLA board the station and find it plummeting to Earth. It will take both teams working together to find a solution. Unfortunately, this task is easier than it sounds with both teams sniping at each other, hero-worshipping Superman and turning to Batman for answers instead of Cyborg.

As things go from bad to worse, some harsh decisions are going to have to be made in order to determine what happens next and which team will survive. A task that doesn’t get any easier with Batman refusing to step in and take over. Meanwhile, on the planet below, the Justice League and JLA are running into another problem. A legal one.

Beyond the tension of the moments, there is a palpable tension between these two teams that is coming to the surface in wake of their shared peril. It’s difficult to see where this story is going and that is one of the things that is compelling about it. The threat from the Fan is real, but his motivations and endgame continue to be a mystery. It’s a testament to good writing and great visuals that I was engaged with this issue from start to finish.