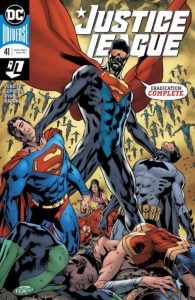 The invasion of the Supermen will push the league to its limits as Batman appeals to a powerful force to help turn the tide.

The Eradicator and his Daxamite army are relentlessly pushing the Justice League to their limits. With all of Superman’s weaknesses gone, the team only has minutes before the Daxamites are fully powered, but they won’t have a moment to regroup as the villain presses the attack harder.

At the same time, Batman will find that appealing to Madam Xanadu will be harder than he thought as the sorcerer is not impressed with or impressed by his presence. Batman will have to take on a new tactic if he wishes to enlist her to his cause. But it might already be too late as the team finds itself at the mercy of the Eradicator and his plans to eradicate the planet. 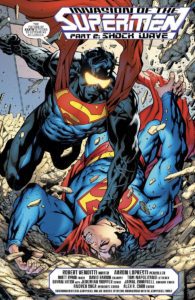 There is an immediacy to this story that is appealing and Robert Venditti does a great job bringing both sides of the story to a head in the final moments. There are moments that feel derivative of other storylines and I was expecting more in the dialogue between Superman and Eradicator. That being said, there are several entertaining moments in the story that engaged, especially the moment between Xanadu and Batman. It will be interesting to see how Venditti both continues and wraps up this arc.

Aaron Lopresti brings a unique style to the art. There is a lot of action in this issue and Lopresti fills those moments with great hero shots and awesome details.