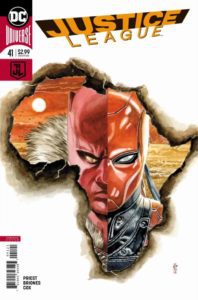 Simon continues to obsess over his upcoming lunch with Superman as he and Jessica patrol their sector of space. He continues to be upset with Martian Manhunter for not giving him a heads up on how to hang out with the Man of Steel and will not stop talking about it.

Meanwhile, in East Africa, Deathstroke is having a conversation about how he stays out of the way of the League and they leave him alone for the most part. A prospect that the militia confronting Superman and the League is not heeding as they try to get access to the downed Watchtower. As the League works on clean up, Kamala informs Superman that he cannot protect the refugees that have come to the area seeking help for long. It’s an interesting situation that the League finds themselves in when confronted with the perception of their power and the limitations of their charter. 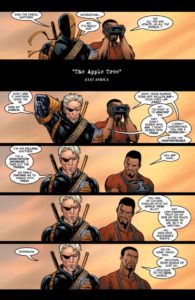 Flash and Cyborg have a pretty tense conversation about The Fan and how vulnerable Victor feels as Diana brings food to the refugees. In Missouri, Aquaman confronts another fan and comes up empty as a Lexcorp team comes to salvage the Watchtower led by the Red Lion (sigh). Another issue arrives when an armed militia moves into the area and Flash and Wonder Woman have to stop them. Batman tracks the fan to a secret sub-level in LexCorp and the two fight until the Fan confronts the Dark Knight with the fact that he is a problem they can’t solve because of what he knows.

Everything in this issue worked for me with the exception of one character and I probably don’t even need to tell you who I am talking about. The writing in this issue and great and the bigger issues that are brought up continue to work as well. I really want a resolution on the Fan issue and hope that there is a conclusion that is clever and worthy of the story written thus far.

Have you seen this:
Batman Fear State Alpha #1 (Review)