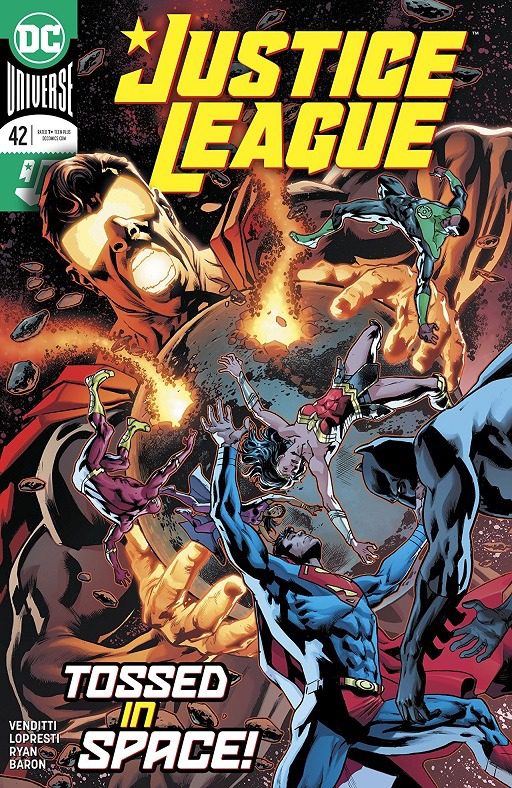 Batman’s tactics leave a team member at risk and a bold new plan could end Barry’s connection to the speed force forever.

The Daxamites are moving into position all over the world with one goal in mind; eradicate all of humanity. With the Justice League on the run, they finally take a moment to realize that Wonder Woman is missing and in the hands of the Eradicator. Green Lantern blames Batman for letting Diana get captured and tells the team that he has a plan for getting her back and removing the Daxamite army from the planet.

Wonder Woman’s power is being extracted by the Eradicator when an unlikely ally comes to her rescue. This gives John Stewart the opening he needs to begin a bold plan to remove both the Eradicator and the Daxamites from the field, but it will take Barry Allen pushing the speed force to its limits at the potential cost of both his connection to it and his life.

Have you seen this:
TLDR #53: HAWKEYE & BLACK KNIGHT: CURSE OF THE EBONY BLADE

Robert Venditti keeps the plot and the action moving forward in this issue. The plan is a bold one and the story moves at a pace that keeps the reader on edge along with the characters as they attempt to execute it. The dialogue is well done and the clash between John and Batman plays out naturally as the two disagree, but defer to each other’s strengths in relation to the mission. Venditti does a great job of playing to the team dynamic and the undercurrent of respect between these heroes comes through.

Aaron Lopresti delivers some great art throughout this issue. The characters look great and I love the classic feel of the art. The action is executed brilliantly with a sense of power and energy, especially when Flash begins his part.