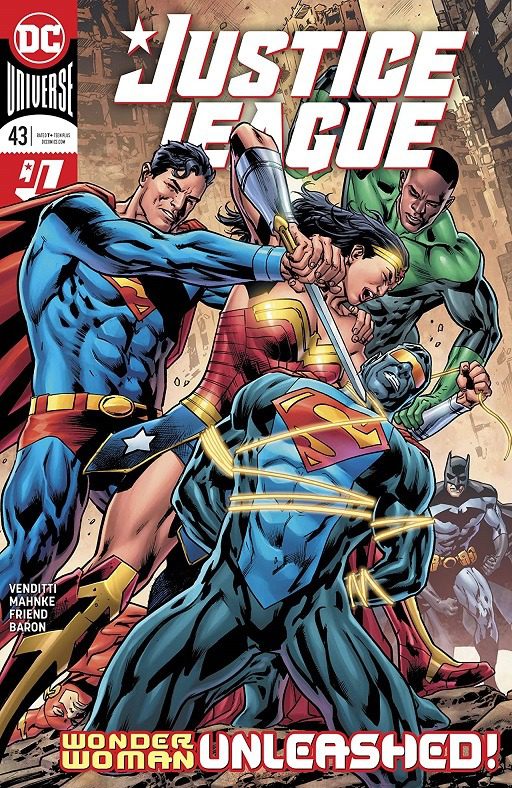 The Justice League has one chance to end the Daxamite threat to Earth and it might take the sacrifice of their most powerful member.

John Stewart’s plan is a success. After using Flash to lure the Eradicator and his Daxamite army into a chase across the world, Xanadu opens a portal transporting all of them off world and to a planet with no yellow sun to fuel them. With the Daxamites vulnerable, the League presses the attack and Eradicator begins calculation for crafting a new army for the survival of Krypton. One that will not have the weakness of his current troops.

As Eradicator begins to turn on his own troops, it will be up to Clark to step in and make himself a target of the machine.

Venditti does a great job of wrapping up this arc for the League and the story has a satisfying conclusion. The characters are written to their strengths and the story does a good job of playing to the team dynamic. Eradicator is satisfyingly menacing and each character is given some great dialogue. That being said, the story’s pace felt rushed at times. Characters introduced in the arc like Xanadu and Sodam are short changed for the sake of wrapping up the bigger arc and their presence almost feels unnecessary at times. It will be interesting to see if the next arc improves on integrating both the League and the side characters better to make a more engaging story.

Doug Mahnke delivers some excellent art in this issue. The action is fantastic and every panel is filled with beautiful details that ramp up the story and capture the eye.