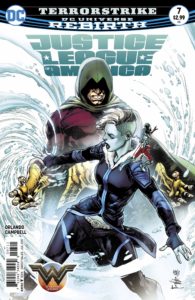 The new base for the Justice League of America is continuing to take shape as Batman oversees the details with the newly liberated Xenos. At the same time, Atom and Killer Frost are researching a possible cure for Caitlin’s condition. As the find the display that they are seeking, Caitlin gets to use her skills as a scientist to find a way to control her powers. As both Atom and Caitlin work together, there are the rumblings of feelings between the two of them. Outside the museum, two security guards have a run-in with a villain calling himself Terrorsmith who is also looking for something in the museum.

As the villain enters the museum, Frost and Atom decide to call in some help. Unfortunately, Lobo and Canary are dealing with another issue as Lobo has run into another alien from his past and a fight naturally follows. As Atom takes on the transformed guards, Caitlin goes after Terrorsmith, who tries to use her fears against her. A move that doesn’t work out well for him. In Harlem, Vixen and Ray are bonding over some community service and in a sparring session with Black Canary, Caitlin is confronted with feelings that she is suppressing.

I like this issue. It’s self-contained and allows for the reader to learn more about the team and how they interact with each other. Steve Orlando has taken a much-needed step back with this issue and set up some really interesting interpersonal conflicts that I hope can be explored as the series progresses. Jamal Campbell’s are is really good. It is very straightforward and in step with the tone of the issue. The story overall works and there are some genuinely sweet moments between Ryan and Caitlin that I hope gets explored in the future.