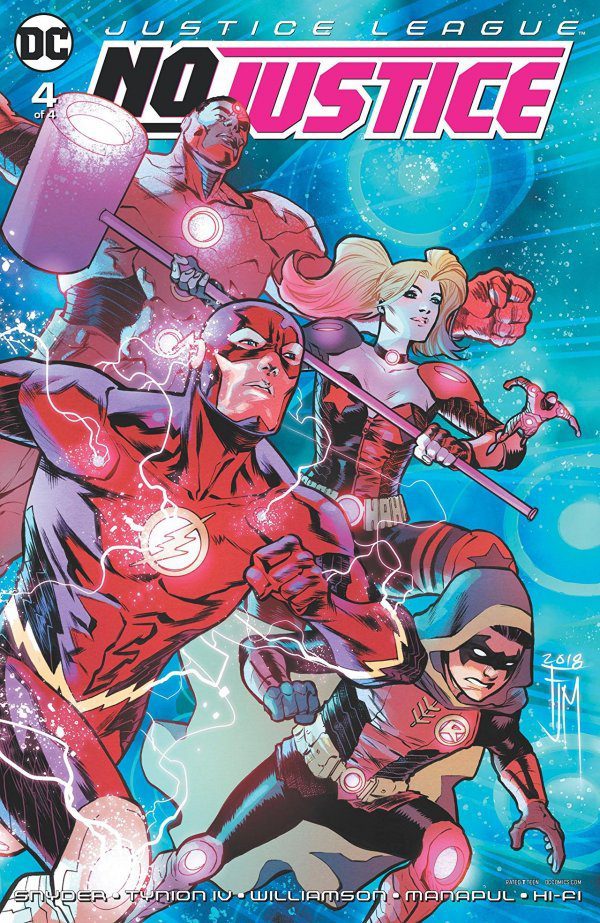 The Green Lantern Corps continues to try and contain the damage to the Source Wall as best they can and Hal Jordan needs to know what the plan is to repair it. At the same time, he gets a call from his Hard Traveling Hero buddy Green Arrow who tells him that there is another problem as the four space gods have converged on Earth and are preparing to consume it. I like Waller and Ollie’s banter in this story and this issue is no different as they trade verbal punches about Waller’s failure as well as the League’s. It’s been a really well-done contrast between the two of them.

On Brainiac’s ship, the teams are licking their wounds and Cyborg is trying to keep the ship from exploding as the Colu refugees continue to drift in the wreckage of their home planet. After confronting Vril Dox in an attempt to get him to help, the son of Brainiac gives a pretty compelling reason for leaving the heroes and villains to their collective fates. What I enjoyed about the exchange is how Martian Manhunter steps in to help everyone find a new solution. One that even Brainiac never considered.

This leads them back to Earth and another confrontation with Waller as they finally find a means of taking on Vril’s enhanced tech that he’s using to accelerate the growth of the trees. I like that Cyborg has to employ a tactic from his previous life in order to save the planet. It looks like the events of this story are going to cause a ripple effect throughout the DC universe and everyone is getting their plans in place to try and be ready for what comes next as well as new tactics they need to employ to survive. It’s going to be interesting to see what these heroes decide to do going forward because it looks like the threats are only going to be bigger and they are going to have to be on guard more than ever against previous threats with new power.

This series ended exactly the way it should have, with a sense of hope and mystery. From what it looks like at the end of this book, there are going to be some interesting and exciting things coming in the future and this series is a great jumping off point for both fans and newcomers alike.