Today we are going to review Jydge, developed and published by 10tons Ltd.

In the city of Edenbyrg, a horrible crime has been committed. Thousands of mother’s cry out in anguish, children weep in the streets, fathers try to hold it all together, but even in the shadow of terror, they show their fear in front of their loved ones…. What could have possibly happened in this once futuristic paradise?…. The letter U has been outlawed. 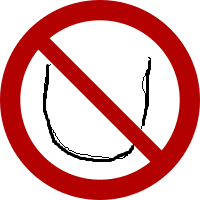 Ok, Ok, I’m kidding…..  The real problem is that a wave of crime has hit the once beautiful Edenbyrg. To correct this problem, what else is there for a futuristic city to do but to send in their own lawmakers… Jydge… Jyry… and Execytioner… The Jydges….

Jydge is a top down shooter where it’s your job to eradicate crime as you see fit. Jay walker? Feel free to shoot him with your rocket launcher. That’s the price of breaking the law… and the Jydge? HE. IS. THE. LAW.

Jydge works off a mission based system, you receive a briefing of what you need to do to bring peace to a part of town, it could be a bank robbery, a family hostage, or someone attempting to use the letter U in an email to their granny (ok ok, enough with the U jokes.) 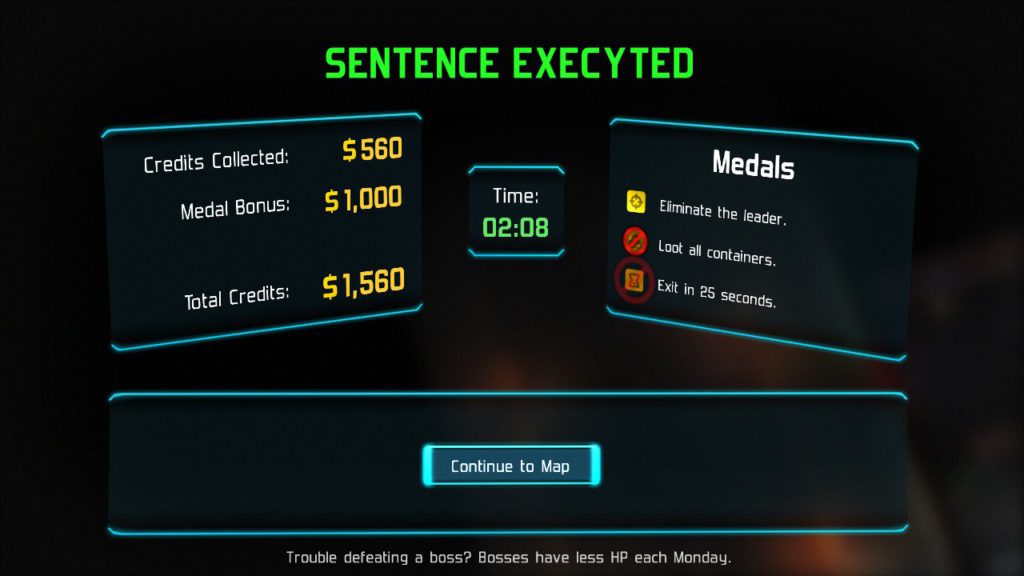 I said enough with the U jokes!!!!

After each mission, you collect credits that can be used to further enhance your Jydge. You can get extra credits for meeting certain medal criteria such as, eliminating all the baddies in a certain amount of time, or finding all the containers, or finishing the level in a certain time period.

You can use these credits towards new weapons, cybernetic enhancements, extra health, a boost for those pesky citizens so that they don’t die as easily, and  even a drone that will follow you around to help enforce the law. The game mechanics are simple enough, the sticks aim, and the triggers fire your primary and secondary weapons. I had a fun time blowing away bad guys, and the soundtrack is phenomenal. It really sets the tone for the game. Jydge also features shared screen local co-op so you can play with a friend to battle the bad guys with you. 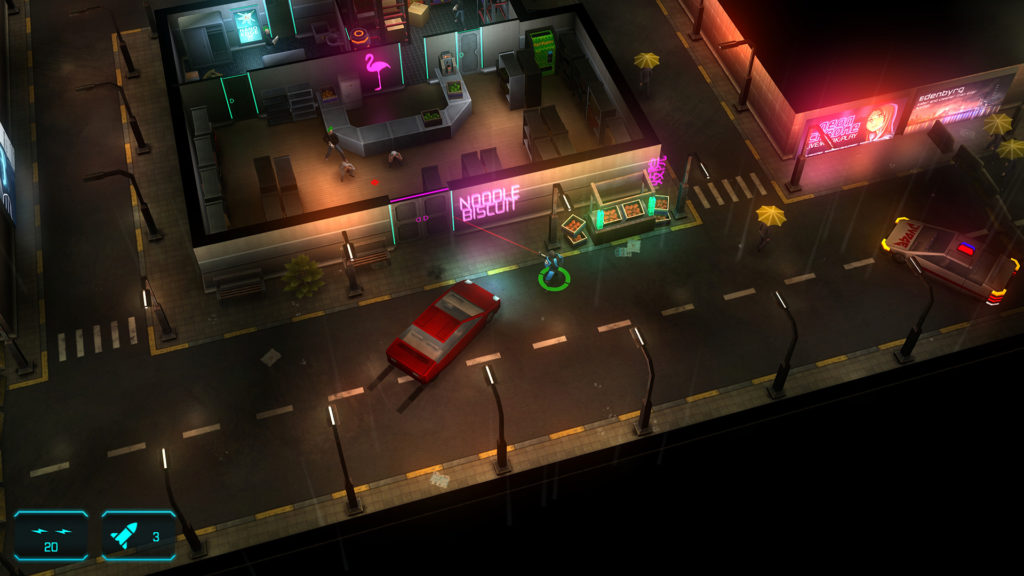 Let’s be honest, who hasn’t wanted to shoot up their local Noodle Biscuit before?

You won’t be playing Jydge to hear a great story unfold, it’s your run of the mill blow em all up type of game, but that doesn’t mean it’s not fun to play. The game currently costs $15 which I think is more than fair for this shoot em up. I would recommend it to anyone looking for a quick Judge Dredd fix. As a side note the game is also a prequel and spin off to Neon Chrome, which you can find reviewed by yours truly here. (No letter U’s were harmed in that review..oh god damnit, I couldn’t resist). According to the developer, the enemy bullets were purposely slowed down to give your Jydge a feel of really being in control of the situation, and being a far better combatant than the baddies. Your Jydge is also equipped with a strike, which is useful if there’s an opportunity to sneak up on a bad guy.