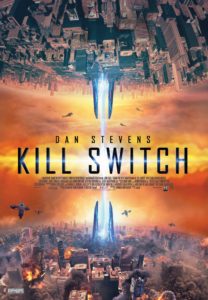 Kill Switch embodies the epitome of High Concept. The film, directed by Tim Smit, is an amazing feat in both concept and visual effects. The only thing working against it is the pacing of the plot.

In the film, Dan Stevens (Beauty and the Beast) plays Will Porter, a physicist and former NASA pilot who is recruited by a powerful energy company called Alterplex in order to help them deal with a crisis. The company has created a means of drawing unlimited energy from the atmosphere. Unfortunately, the energy that they are drawing is destroying a parallel Earth. Will is brought in by Abby (Marlohe) to travel to the alternate Earth to install a device called the “Redivider” in the alternate version of the device in order to separate the Earths.

Will must battle soldiers, rebels and high-tech security drones from the parallel Earth in order to fight his way to the device. But is he doing the right thing or is Alterplex hiding a secret that could threaten the existence of the planet?

The movie is visually great. There are some interesting and well-done action beats that have the look and feel of a sci-fi based first-person shooter. The only real issue is the plot doesn’t hold up when one examines the motives of the characters. Will is both a scientist and pilot, but he makes decisions that cause more problems than they solve. Abby is obviously hiding something, which makes moments with her on-screen slightly cringe-worthy. All in all, the film looks good from a concept perspective, but plot-wise it falls into the trap of being all flash and no substance.

Still, if you’re looking to try something new that’s opening up the media of film, Kill Switch is worth a look. The first person perspective works overall and it is fun to watch.