King of Fighters XIV is the latest game is a long running franchise which began as a SNK showcase, bringing in characters from the company’s other games like Fatal Fury and Art of Fighting, as well as adding new ones. The series has grown to become SNK’s flagship game, spawning thirteen sequels and numerous spin-offs. After a five year absence, King of Fighters has returned on the Playstation 4. Did SNK deliver a champion fighting game or does it get knocked out by the competition?

King of Fighters XIV’s story is standard fair for the series; skilled fighters are sent an invitation to the ‘King of Fighters Tournament’. This year’s host is a mysterious billionaire named Antonov, who not only purchased the rights to the ‘King of Fighters’ tournament, but proclaims himself to be the “first champion.” Despite his frightening appearance, Antonov is not a bad guy, an interesting change considering that previous tournament hosts included villains like Geese Howard and Rugal Bernstein. Each character has their reasons for entering the tournament, ranging from testing their might against other skilled fighters to carry out personal vendettas. Much of this background is revealed in pre-match banter between characters who know each other and each team’s story ending. Following the match with Antonov, the tournament is interrupted by a being called Verse, who serves as the game’s final boss. Very little is revealed about Verse, except that he harbours the souls of fighters lost in previous tournaments. He is more of a McGuffin than an actual character, acting as a way for SNK to potentially bring back fighters from previous games. For example, Orochi , the final boss in King of Fighters ‘97, makes a cameo appearance in one of the team’s endings. What role Verse will play in future games is uncertain, but I’m interested to see where this newest King of Fighters storyline goes. 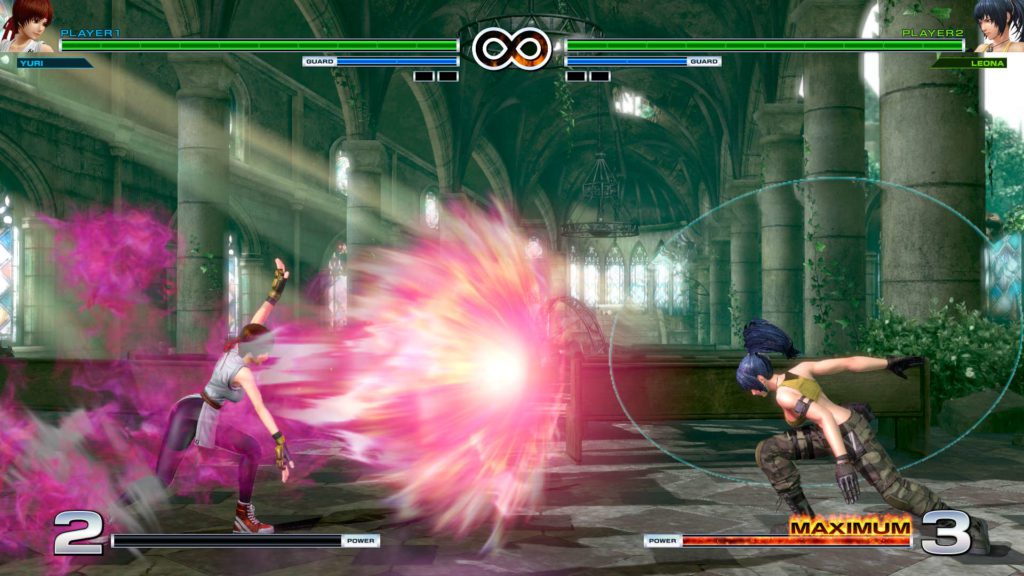 Graphically, King of Fighters XIV isn’t impressive. Character models and backgrounds are more than adequate, but lack the detail found in other fighter games like Street Fighter V and Mortal Kombat X. To be blunt, the game looks like it could have been released for the Playstation 3. That isn’t to say King of Fighters XIV is visually unattractive. The character models give the game an anime-like feel. This is not just a happy accident, but a decision made by SNK after the negative reaction to the first teaser trailer.  Although character animations are fluid, and visual effects and impressive, but they don’t compare to other games on the Playstation 4. Despite this, King of Fighters XIV’s audio is solid. There is a variety of different stage music ranging from Chinese-styled electronic to country rock, each designed for specific locations. There is also special rivals music, which are remixed versions of memorable tunes from previous games that play when certain characters fight each other. Players can listen to their favourite music, as well as the audio for the game’s characters, in Gallery mode. The only fault I can find here is that, with the exception of the announcers, all the game’s audio is done in Japanese. Considering how poor the English audio was in the King of Fighters: Maximum Impact games, this isn’t a major misstep, however, it would have been nice to have the option to choose between the two languages like players are able to do in Street Fighter V.

Have you seen this:
RADIANT BLACK # 7 (REVIEW)

In terms of gameplay, King of Fighters XIV offers a surprisingly deep experience. Though individual characters lack the depth of those found in games like Street Fighter V, the roster size makes up for it. There are sixteen unique pre-set teams, and players have the ability to make their own teams out of the fifty characters available (forty-eight unlocked from the start plus two boss characters who are playable after finishing Story mode). Each character has a handful of normal attacks and special attacks, two super moves, and one CLIMAX super move. Though not much different than other two-dimensional fighters, the game’s combat system is a step above its competition. King of Fighters XIV offers an incredible amount of freedom when performing combo attacks, allowing players to combo normal attacks into special, then into supers and even a CLIMAX super. Activating MAX mode (which consumes one super gauge bar) allows for even more combo opportunities. With practice, players will be able to pull off combos that do over sixty percent damage to their opponent. Since the game’s combat system doesn’t lock players into specific combo strings, it encourages experimentation, which in turn increases the game’s replayability. There is a great fun in discovering a combo that other players have missed and using it against them. 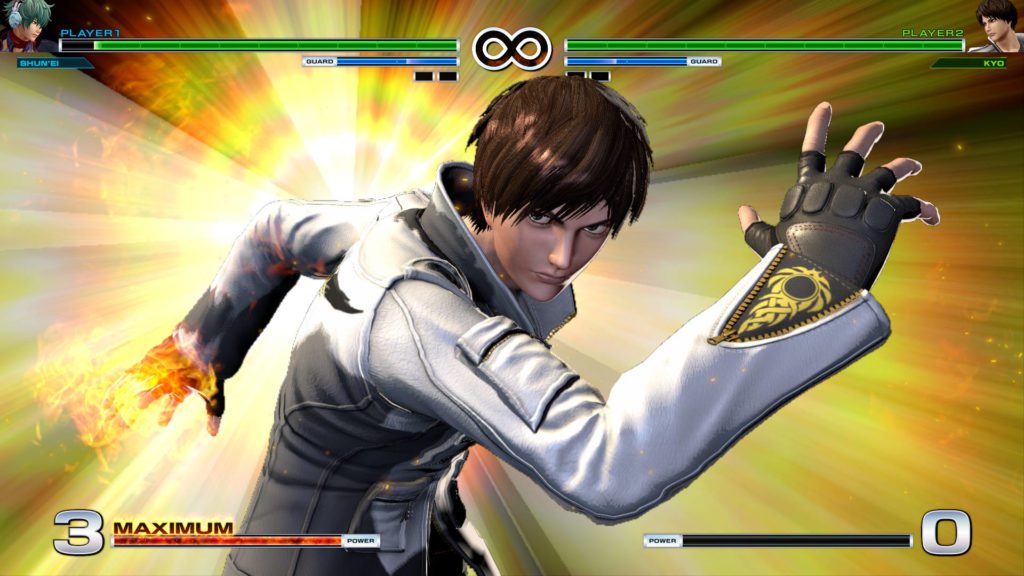 Unlike Street Fighter V, King of Fighters XIV doesn’t lack single player content. Story mode is the core of the single player experience, allowing players to choose from either a pre-set team or create one of their own and play through the game’s story. Mission mode offers the players addition challenges like Trial, Time Attack, and Survival. Though not groundbreaking, Mission mode does add a much needed change of pace after completing Story mode with every pre-set team. Versus mode, though traditionally a two-player mode, allows for single matches against a computer controlled opponent.  Tutorial mode teaches players about King of Fighters XIV’s combat system, starting off with basic movements and attacks and working up to more advanced techniques like the CLIMAX cancel. There is also a Practice mode where players can practice what they learned in Tutorial, as well as learning each character’s moves. Again, considering how deep King of Fighters XIV’s combat system is, much of the player’s time will be spent in Practice mode perfecting combos. Online multiplayer is at this point in an odd state. Some matches are perfect, while others have a noticeable input lag, bizarre slowdowns or a weird glitch that turns combat into a slow motion brawl. SNK has promised to address these stability issues, so hopefully fans of online fighting games won’t have to wait too long before its running perfectly. Aside from the play itself, the Online mode is filled with a variety of activities for players. There’s Ranked Match, Free Match, and even Online Training for players who want to practice combos with their online friends. Aside from this, players can check their online stats and even watch streamed matches. Considering the amount of online content available, it is important that SNK address the stability issues quickly. Finally, no matter what mode players choose to play, they will unlock Gallery content. This includes movies, music, and character artwork from previous games. This added incentive will keep completionists glued to King of Fighters XIV for hours.

Despite its faults, King of Fighters XIV is a solid two-dimensional fighting game. For those disappointed with Street Fighter V’s lack of content or repulsed by Mortal Kombat X’s gore, this is game that should be considered. While not the most visually attractive fighting game available, the game’s large roster of characters and surprisingly deep combat system more than make up for its graphical shortcomings. While there are stability issues with online multiplayer, SNK is promising to fix it. Even with the online multiplayer short comings, there is more than enough content here for fighting game fans. SNK have given players one of the best fighting games I myself have played since King of Fighters ’99 Dream Match for the Sega Dreamcast. This is one that I believe that is worth the full purchase price.

Highlights: A solid fighting game with a large roster of characters and a deep combat system.

Weak Points: Character models look dated and there are some issues with online multiplayer. 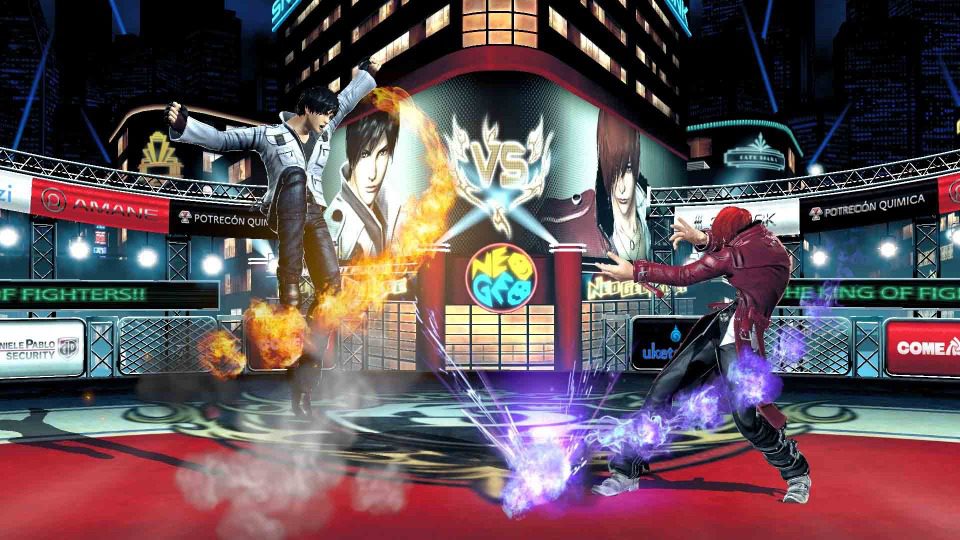