Thor is at the mercy of Gorr the Godkiller, but the god of thunder does not stand alone against the coming darkness.

As Thor fights his way out of a sea of darkness, Gorr gloats at his success. A success that is short lived when then thunder gods granddaughters arrive to help the All-Father.

Their journey to Thor’s side takes some interesting twists and turns leading them to a remote planet that Thor helped long ago. A planet that has a secret that might be exactly what Thor needs to bring an end to Gorr’s theme. 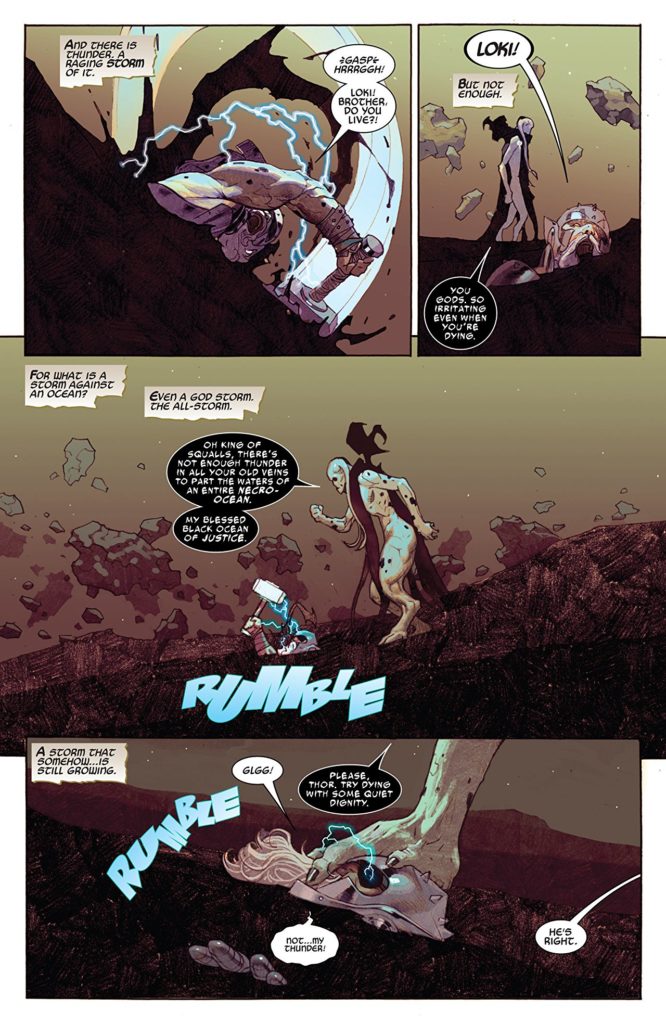 Unfortunately, Gorr’s connection to the necrosword will make the task of stopping him harder than they imagined, but the arrival of new friends might help.

The story continues to grow in scale, but Jason Aaron does an excellent job of keeping the story character focused. The story is paced beautifully with great moments of surprise and fun throughout. The dialogue is fun and all of the characters are given great dialogue moments. The pace of the story is well done and moves brilliantly between the main story and the side story with Thor’s granddaughters. Aaron has created a fun and exciting world for Thor in this series and this issue makes me interested in where this story goes next.

Esad Ribic and Das Pastoras deliver some beautiful visuals in this issue. The contrast in styles is perfectly executed between the adventure of Thor’s granddaughters and Thor’s battle against Gorr. There isn’t a lot of action in this issue, but there are some great visuals that speak to the epic scale of the story and its characters.