Kona
Developed and Published by: Parabole

Kona is a detective/thriller game that takes place in Northern Canada in the 1970’. You play as a private investigator, Carl Faubert, who arrives at a snowy, sleepy town on the order of his client, only to find the place practically deserted with an ominous glow around it.

A semi-open world thriller sprinkled with a few survival elements is what I would describe Kona as. If you have ever played Slender man then you will know the kind of eerie dread these time of games bring to the table. The game puts you right into the narration begins. A big part of the game is exploring and looking for clues around the deserted town. Kona does a really good job at capturing the loneliness and eerie feeling of a giant mystery surrounding the town. You utilize anything that you can find in the semi-open world and the only real direction you get is the narrator. The narration in the game is very well polished and pleasing to the ear bringing to life the story and somewhat feeling like you are playing through a movie.

The controls are straightforward and easy to use, not a very complicated game to get the grasp of. On the Switch, it doesn’t feel completely responsive when moving around compared to other 1st person games but it does the while being mobile or docked. 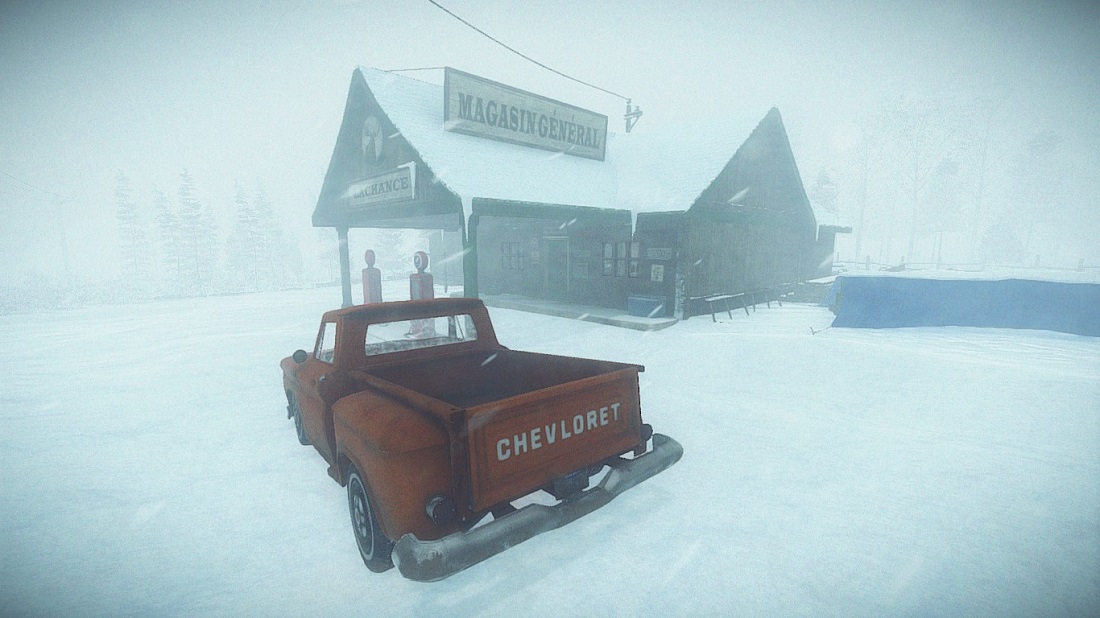 I found myself loving the mystery traversing around the woods and other important areas however it wasn’t very challenging, I probably spent about an average of five minutes in an area before discovering what items were needed and how to progress. Kona also brings a little bit of a survival element in that you have to stay warm if you are outside. The key to staying warm means you have to scavenge around for supplies like wood and matches to light a fire. Carl’s truck is his best friend as it protects him and also cargo’s all of the goodies in the event you run out of space. However, like I said the game isn’t very difficult. I only ran into one part where I had to sit and think which brings up a rare weak spot of the game. The combat, aside from the cold, wolves are Carl’s only regular enemy, and while their AI is very simplistic, they’re also eccentric. By throwing steaks at them, you can avoid confrontation or you’re reduced to using a hatchet to weasel through or shooting the cute little fellas.

Kona isn’t really going for a true survival game so I’m more than willing to look past the combat issue. The core detective work and scenery is what keeps players coming back for more. As mentioned, the scenery is beautiful and this mixed with great music and sounds really bring a sense of both tranquillity and despair. From the giant snowstorm to the chilling towns, woods, and buildings.

Overall, I gotta tip my hat to Parabole for bringing Kona to the Switch and letting gamers experience this excellent thriller via anywhere. A game that had very few weaknesses and an enjoyable, ominous experience throughout many puzzles, sleuthing and surviving I can say that this is worth the price tag, especially if you are a fan of the genre and walking sims. The story will keep you hooked and the narration is a pleasing addition. The load times aren’t very friendly especially since it is a card and not a disc and the flow of the game is sometimes interrupted. Parabole has mentioned that this is the first of four installments so be on the lookout for more here at the GWW.