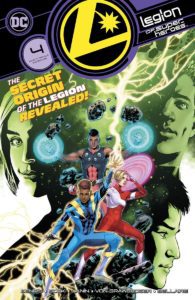 Jon Kent will learn about the events that led to the creation of the Legion as a new threat to the heroes draws closer.

Jon Kent is finally going to get the orientation that he’s been missing since he joined the Legion of Super Heroes. After being taken to Computo, Jon is given the opportunity to view the memories of some of the Legionnaires. He learns about the circumstances that brought Saturn Girl to the team. He learns the political stance that brought Lightning Lad to the attention of the President of the United Planets. He also learns of the motives behind Cosmic Boy’s entry into the ranks as well.

The device shows Jon how the three Legionnaires interact with each other and their patron before he is taken from the simulation because of an emergency. An emergency that directly connects to the memories he experienced and showcases the tense politics of the 31st Century. 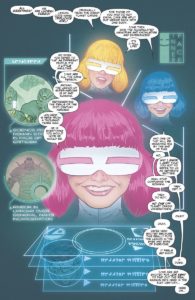 I keep trying to look for things to like about this series beyond the concept, but the story is moving so slowly that it is becoming harder with each issue. Bendis took an interesting and fun concept and has made it almost tedious to get through. There should be more to Jon Kent’s presence in the future than constantly reacting to events without context, but that seems to be all he does. The running gag of him never finishing the orientation has run out and nothing about his presence seems to be either unique or particularly interesting and that’s because nothing in the arc seems unique of interesting. The story moves from moment to moment with seemingly no direction and that’s a shame because there are some things in this series that I would like to see explored.

Ryan Sook and Mikel Janin do great work with the art in this issue. They take the visuals and make them awesome to look at, but there is nothing going on in this story that lets the art shine.