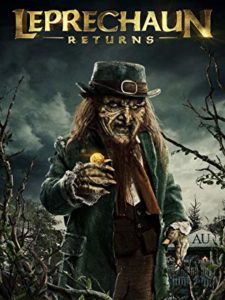 He’s back to “Shamrock your world.” If that tag line doesn’t set you up properly for this movie… thenyou have never experienced the pure campy horror that is the Leprechaun series - WHICH YOU CAN IGNORE! Why? This is a direct sequel to the original 1993 film, so if you want to, you absolutely can ignore all those sequels.

Lila is the daughter of Tory Reding, played by Jennifer Aniston, and joins a sorority which happens to be located in the same house from the first film. The well where the Leprechaun was left? Still there. When I was younger, I watched the Leprechaun saga and fell in love with it. When I saw the house, I flipped out. It is a direct sequel! I was so excited to realize this!

The film is a worthy successor. Even though Warwick Davis didn’t return to reprise the role, the character contained the same evil yet campy 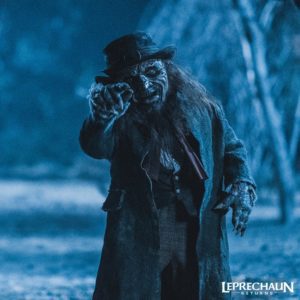 attitude (so good job Porco!). Since it’s twenty-five years later, the Leprechaun isn’t looking too good, and slightly decomposed. The design is amazing, and really brought the character into the present.

Now onto the two things I loved about this film: Intelligent female characters, and incredible kills. The two level headed character of Lila and Katie thankfully take the helm in this film, and come out the victors. They use their brains, rather than tripping while they run away. The kills? Gory and imaginative. Using a solar panel? Wow. I won’t spoil it, but it’s the most realistic kill I’ve seen.

There aren’t too many special features on this DVD/ Blu-ray. I always hope for bloopers on everything I watch, but sadly, none are included. I find bloopers on horror films are the best. However, there are the “Still Gallery” and a short “Behind the Scenes” which are clips of filming and the creative process. The meat and potatoes feature is “Going Green with Director Steven Kostanski” which goes in depth behind the scenes a bit more, and goes into the process of the film. I would have liked some more special features, but not every film includes bloopers so… just a personal preference.

“Leprechaun Returns” comes out on DVD and Blu-ray on June 11th, and I highly recommend you buy it! It’s a well made sequel to the original film, and learning the process behind the film is interesting.