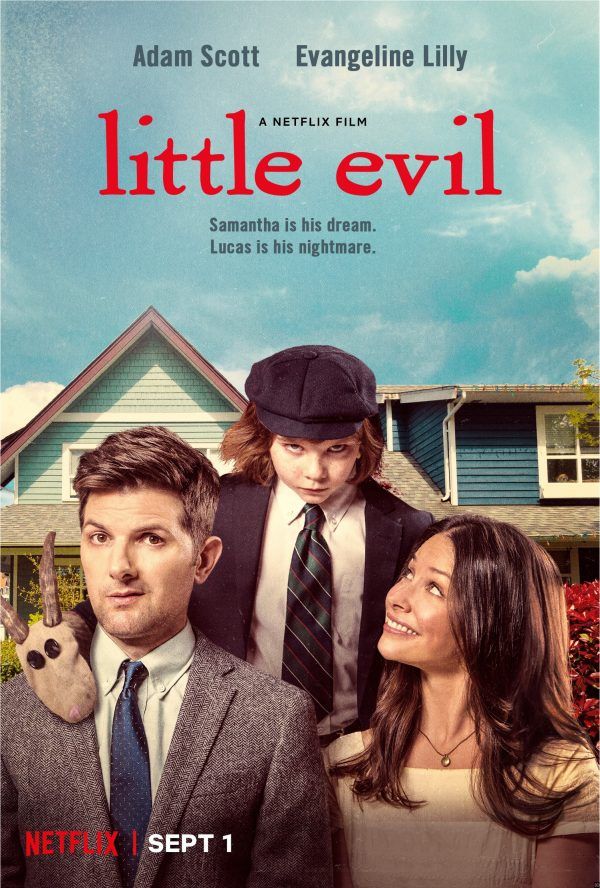 What Eli Craig has done with this film is write a love note to the horror genre. There are quite a few references to a number of horror and thriller films and if you blink you might miss some. The great thing about Eli’s writing is that none of them are forced, they are carefully woven into the story. The story, of course, being about Gary (Adam Scott) becoming the stepfather to a little boy (Owen Atlas) who may be the antichrist. I know, your basic comedy plot, right?

Little Evil follows Gary in his misadventures of being a new step-dad. He realizes something is different about Lucas but is not 100% sure what it is. Lucas’s mother, Samantha (Evangeline Lily) seems to be in denial that anything is wrong with her son. If parenting was not hard enough, how does one deal with a situation like this? Gary joins a support group for step-dads with his lesbian co-worker, Al (Bridget Everett). The group is made up of some amazing comedic actors and I have to wonder if the therapy scenes were scripted. There is a great flow of jokes, and feels like watching a professional improve group. They help with the comic relief in a genuinely creepy film without getting tiring.

If you are a fan of horror, comedy, movies about family, or just great films in general, you need to watch this Netflix original. It tells the story of a normal, everyday man just trying to have a normal life, but with a twist. The writing is excellent and each actor seems to be made for their parts. Adam Scott has a great dry wit about him. Evangeline Lilly is very maternal and you can believe that she was naive as you claims to have been in her past. But the stand out performance goes to Owen Atlas as Lucas! He does not speak, except occasionally through a goat puppet, for over an hour, yet owns every scene he is in. There are not many people who can act through facial expressions, but this kid does it. He can give the original Damon a run for his money.

Now go pop some corn and turn out all of your lights while you enjoy this creepy, hilarious, and very moving film. Then come back and read my spoiler section of this review and let me know if you agree or disagree with my thoughts.

I am a big fan of horror films and comedies, I also really enjoy the work of Eli Craig. All of that being said, I still was not holding a lot of hope for Little Evil, mostly because Netflix has burned me in the past. I am very glad I put that behind me and gave this movie a try! It has a lot of the elements of horror that I enjoy, enough comedy to keep it light but not ridiculous, and an amazing cast. You really believe that Gary is going through all of these issues because Adam Scott is a real “every man.” He is the type of character that makes you want to stay on his side no mater what he is doing. In a film like this, that means believing he should kill a 5 year old boy! Not many actors can have you believe in them that much.

The main plot about this film is very Omen like. Lucas is the antichrist and bad things always happen when he is around. But there is a twist to Eli’s version, Lucas is not evil in and of himself. As Gary puts it, “Lucas is not Satan, he is just a portal to Satan.” By doing this, Eli keeps the innocence of childhood intact and also gives us hope for Lucas. Watching the plot, you understand why Gary feels like he has to do what he has to do, because of there being an element of free will, you get to also be on Lucas’s side. I found it to be a nice change from the normal child is always good or always evil trope so often used.

Have you seen this:
Love, Death + Robots Volume II Trailer Drops From Netflix

Comedy is something that can be overused in a horror film. When I think about the Child’s Play sequels, or the like, I think about how ridiculous jokes in scary films can be. Little Evil has a perfect blend. The step-dad support group lightens the mood when they need to, but is also there to kick demon butt when the time comes. Eli also uses references to other horror films as a release. My favorite example of this is the Shining like twins at Lucas’s birthday party. It is comedy that is used not to take you out of the film, but to remind you that it is one. Joke and tropes are used because they work, but it takes a good eye to make them really move the story along.

The best part about this movie is the heart that it has. Like I said, we find out that Lucas has his own free will. This comes into play when Gary takes him to the water park to kill him, but they bond instead. This is the first time we get to hear Lucas, and also when he tells Gary that he does not want him to die. As a father myself, I admit that these scenes pulled at my heart strings. I was no longer cheering on the hero or the villain, I was hoping for the family. If I had one small complaint about Little Evil is that it is about 10 or 15 minutes too short. By the time Gary and Lucas have connected, the film is almost over. I would have at least liked a little montage of family activities besides the race at the end. The story also could have explored for a moment if Lucas can still really use his demonic powers. Maybe we will get a sequel one day!