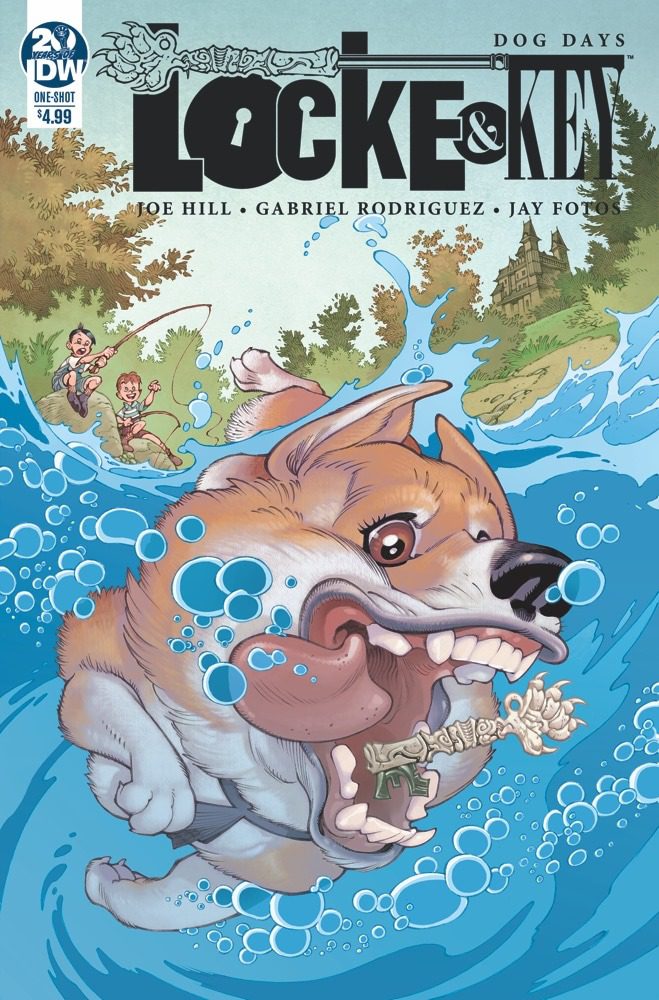 Joe Hill is busy this holiday season. The writer not only just launched Hill House Comics, a new line of five mini-series under DC; the first mini- series, “Basketful of Heads” just dropped on Halloween, but Hill also made his first new entry into the Locke and Key universe in three years with Dog Days. All of this and the announcement that Locke and Key are getting a live-action show on Netflix! (release date to be announced)

While a new flood of fans will be rushing the back issue bins and graphic novel shelves in an effort to catch up with the goings-on in Lovecraft, established fans will have to wait just a little longer before Hill opens the door to a new saga. This one-shot from IDW is more of an appetizer than a meal, in fact, it may be a bit too short on content to warrant the $4.99 cover price.

Dog Days is a collection of two short stories. The titular tale is a charming little offering of two boys and their dog; only thanks to the magic of the Keyhouse the dog has been transformed into a human boy who can talk and share his view of the world. He talks of peeing on trees, waiting by the door for his young masters, and glories of being a free spirit.

The second tale is a wordless story titled “Nailed It” that was previewed at this year’s SDCC. This short ten-page glimpse covers the rebuilding of the Keyhouse. Yep, it’s back in time for a promised new storyline that the creators say can not be missed.

Rodriguez returns to provide his unique visuals. While the narration largely sits out the second story in this one-shot Rodriguez is allowed to shine. The old-timey visuals of Dog Days are also enhanced with illustrations of boys playing during lazy summer days, placing the reader right in the thick of the setting and the time period.

The vintage time period is also aided by the color palette that Fotos uses. Washed out tones and an almost hazy tinge to the artwork gives the book a feel of days gone by. If this is your first foray into the L&K universe then you’re in luck as this is a very welcoming entry point as the art team on this issue is performing some of their best work.

While the two Locke and Key stories are the selling point for this book, it was far too light in content. The five-dollar cover price is going to cause a lot of readers to leave this on the shelves and just wait for it to be included in the next graphic novel; it’s obviously made for the hardcore crowd who will buy anything to have a complete run of the series.

While the tales were charming, there is just not enough here to warrant a purchase with so many other Joe Hill penned books on the shelves right now…and the promise of more to come as the remainder of the one-shot is devoted to a preview of Hill’s new IDW series “Dying is Easy”. In fact, Dying is Easy had more dialogue than the second L&K story and just as many pages, making this one-shot feel more like one long sales pitch for a new series that comes out next month.

While sparse and expensive this one-shot does have some heart. Be warned though, you’re not going to get your full money’s worth.