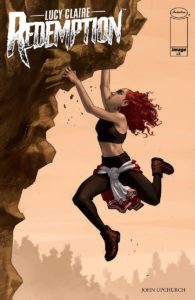 Over the last few months, there has been a series that I have quietly been keeping tabs on. One that stood apart from the normal offering of Image. A book that looked different. A book that reads differently. But I wanted to wait to see if the creator and the series were going to just stand out in the first issue or if there was something of real substance to Lucy Claire.

What John Upchurch has created here is a wonderful series that crosses so many genres and has such heart that it has become impossible to ignore and ridiculous to think that this series is going to be losing steam anytime soon. This is one of the best books that Image has helped reach a mainstream audience in a long time.

Pick a page in this issue or the series at large and you will see mind-blowing artwork that overflows with energy, style, and dynamic colors. Upchurch has brought his “A-game” to each and every panel. His style a modern mix of computer painted colors over digital pencils that looks more like a design art for a video game than a comic. The talent that is on display here is top-notch. Upchurch is an insanely talented individual and an accomplished storyteller.

And it is in the story of Lucy Clarie that the series really flourishes. I could ramble on about the stunning visuals, but the real selling point is the characters. Upchurch has built a world around this supernatural werewolf hunter and her allies that smacks of traditional storytelling dressed in modern fashions, slang, and design. This is a redemption story. It’s right there in the series title. Lucy Claire is a woman on a mission to make up for past mistakes and kill a few (okay, a lot) of monstrous werewolves along the way. 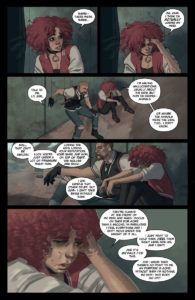 There are touches of multiple cultures and genres in this series. It has tones of classic European fables, Japanese samurai stories, high fantasy concepts of Native American spirit animals, and then there is the core of African American cast members and fashion that give the characters a modern look and feel… this is all evidence of a series that was made by a creator living in modern America who has soaked up multiple cultures and has given birth to something entirely new, yet oddly familiar. New fans will feel at home in this series immediately; even if it takes a minute to get the details of the plot.

In this issue Lucy and her small band of allies make the trek to recover her grandmother’s swords to combat the growing werewolf threat. Along the way, Lucy proves time and again that she is a hero of pure intent through her acts of bravery and kindness. While this issue begins to hint that there are larger forces at play, the action, and the drama stay on Lucy. This is her fight and her struggle. In the end, her act of heroism might just cost her life.

If you’re late to this series I would strongly suggest running to your LCS and getting caught up before the back issues begin to disappear because John Upchurch and Image have a winner on their hands here.