The MAKE AMERICA ROCK AGAIN Tour is Back this Summer

Last year’s MAKE AMERICA ROCK AGAIN tour drew nearly 100,000 fans in 46 cities, and this year promises to be even bigger and better. The tour kicks off on August 4 at the Buffalo Chip in Sturgis, SD and will visit about 40 cities overall. Dates are being added every day, so check www.makeamericarockagain.com often for a full listing of dates and updates. 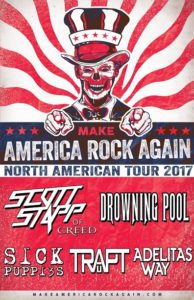