Mana Spark is a new roguelike, action game. You’ll be exploring dungeons and fighting enemies as you work your way to rebuild humanity.  Your main weapon is a bow and arrow. Along the way, though you’ll be able to use things such as bear traps and nets to help you damage the enemies while also finding and purchasing buffs for your character to help as you can die very easily in this world.  When you die, you’re sent back to your camp but collecting runes from enemy drops also helps bring in more people to your campsite and as your community builds. You’ll then get to speak to others to help you upgrade certain things such as your extra weapons or weaken enemies with research.  Whenever you decide to explore again after returning to your camp, you will start from the base level again of the dungeons but the maps are generated differently with each run through.

The art direction is a pixel style and everything looks very clean and doesn’t get muddle or lost.  I never felt like I had a hard time looking at characters and especially enemies when they come on screen to keep track of them as they move around during combat.  The visuals are definitely one of the high points of the game.  One of the biggest lows though is that every time you enter a new level, there is always a loading screen.  Levels are very short so it doesn’t too long to move on and the loading between levels just felt like it really breaks the pacing.  As you explore, you’ll be able to come across a spot where you can buy add-on perks and weapons to help you and you’ll also cash in your runes so you don’t lose them from death.  There is also a bed to rest and this is where you can quit the game and come back to later if you need a break.

The music felt very minimal and nothing really stood out for me on that part felt muddy but everything else with its sound design works really well here.  Sound effects for landing hits, maneuvering around, and enemy noises help give you that feeling of exploring and help your immersion in the game.  Controls for combat are where things are a real low to me here.  You can dodge with a roll but are stuck in place for a second before you can move again.  I feel that a small stamina bar with a bit of continuous movement would have made this a better I understand they wanted to keep it challenging.  When aiming though, the function works like a twin stick.  Move with the left stick, aim with the right, and shoot with the right shoulder button.  However, when moving the reticle around the screen to aim.  It also causes the entire screen to shift around in that direction and becomes a bit disorienting at times and took me a good while to get to it but I never enjoyed it.  It can also be very snappy when letting go the aiming stick and the screen quickly snaps back to the center at times.

While Mana Spark has a very good and enjoyable grind to it to explore and build your camp.  I feel that the design in how you attack will annoy many players and it caused me to think back on an older game called Titan Souls that has a similar combat system but flowed much better to me.  If you can get past that though, you’ll find yourself a very enjoyable small game here to past the time with. 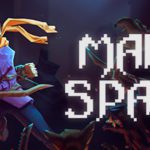