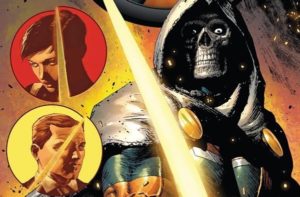 The Pitch: Batman recently fought Deathstroke, who’s as tough a one-on-one matchup as anyone in all of comics. But Taskmaster’s power makes him a tougher matchup for Batman than anyone. Batman can learn his opponent’s patterns, but how is that helpful in a fight against Taskmaster? So, what does Batman do when his greatest ability is taken away?

Plot: After an attempt is made on Bruce Wayne’s life, Batman finds clues leading him to someone that was on the scene. Only, the person he finds isn’t the mercenary. Batman must find a way to catch the assassin and discover who wants him dead. Is it one of his typical foes, or someone from somewhere else in the multiverse?

Other Characters: Mixing in Black Widow might be good for both DC and Marvel — even if she gets her own Marvel-DC Crossover series. Though, she might be better suited as an advisor for Batman v. Taskmaster. Maybe even have her and Batman fight out of confusion early on. The only reason being: save her battle with Taskmaster for the big screen.

Notes: Priest is one of the best there is. Whoever writes a Batman story in a Marvel-DC Crossover event needs to have a track record similar to his. … Sliney’s work on Marvel’s Kylo Ren run was what made me think of him. … Of course, Scott Snyder and Greg Capullo always do a great job with Batman. But they’ve written plenty of Batman. Plus, Snyder has his own Marvel-DC Crossover idea that he wants to work on. … Sean Murphy would be another solid pick for this series.