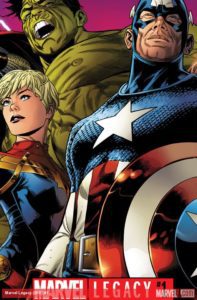 A million years ago, a group of cavemen come upon Mjolnir and attempt to lift it. They are quickly shooed away by its owner Odin who has come to Midgard to retrieve it. he is admonished for losing the hammer by Phoenix who brings him to meet with the other members of the cadre of heroes that have assembled; Black Panther, Starbrand, Ghost Rider, Iron Fist and Agamotto. All of these ancient powers have come together to bring down a threat from beyond the stars who is seemingly getting stronger.

In the present, Robbie Reyes wakes up in his car in an unfamiliar place after dreaming about the concept of Legacy. As he drives off, he realizes that he is in Africa and is immediately attacked by the current Starbrand, who is trying to stop Ghost Rider from reaching his destination. On Jotunheim, Loki has gathered a small army of Frost Giants to infiltrate a S.H.I.E.L.D. storage facility and steal an item that is not listed on any manifest.

The invasion by the Frost Giants attracts the attention of Sam Wilson and Thor, who get a little backup from Ironheart. Meanwhile, Steve Rogers is on a personal quest to determine what his legacy is as Thor Odinson laments his continued unworthiness over drinks. Unfortunately, more mysteries begin to form as Tony Stark’s body goes missing, an Asgardian seer commits suicide because of a vision of the future he can’t abide, Deadpool continues to deal with being hunted for murder and a break in is thwarted at the Santum Sactorum.

As the battle rages in the storage facility, Johnny Storm and The Thing release a signal and wonder if the world even needs them anymore. At the Alpha Flight station, an incoming signal comes in pleading for the Hulk to return to Sakaar. One of the giants manages to escape with the package, but is hit by a beer truck driven by someone completely unexpected as Jean Grey goes the empty grave of an old friend. The mysterious stranger opens the package and discovers that it’s an Infinity Stone and the discover alerts Gamora as Loki stumbles upon a long-buried secret that threatens the entire world.

First of all, there is a lot to unpack in this issue. There are a lot of competing storylines and the entire story is the prelude to stories in the individual books of these characters, but the combined narrative makes sense. I think this issue has a nice balance of oncoming threat and growing hope that made me enjoy this story more. There were moments of great surprise, but also instances where I was reminded why these characters endure. While I may not pick up every subsequent issue, this one does set the stage for me to determine which threads I wish to follow.