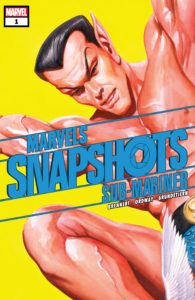 Has anyone noticed that I start a good portion of these saying something like, “Now, I don’t know much about this character, but…”? Sigh. Here’s another article with that statement. I know OF the submariner. If I must compare him to another superhero… then it’s Marvel’s Aquaman, but by no means are they the same. In this snapshot of a story, we see a day in the life of Betty, who is in a relationship of sorts with the Submariner, a half-human, half-Atlantean superhero. The war has ended, leaving many soldiers battling devastating injuries and major PTSD, which has effected Betty’s brothers.

Betty tries to take the Sub-Mariner, Namor, out for a day of fun, a day away from being a rather destructive hero, but it turns into another day of battling, and the reveal that Namor is also suffering from PTSD from the war.

Have you seen this:
The Falcon and the Winter Soldier Episode 3 "Power Broker" (Spoiler Review)

It was a nice insight into the lives of the people behind the heroes. The stories where the heroes are shown to be human, and not as indestructible as the public believes them to be, are some of the great ones. A time where the common man can relate to characters we look up to.

The art - gimme a moment to savor it. It’s very reminiscent of the golden era of comics, which makes sense, as the Sub-Mariner came out in that golden era. Traditional comic art, ooh! Let me just, absorb this in. Wonderful stuff.