2020 is the year for new Minecraft merch. While there’s certainly no shortage of Minecraft merchandise out there, new stuff is always exciting. Sure, a quick search on Amazon can literally furnish your house in Minecraft, and even Mojang has an official store (mobs have no right being that cute as a plush!), but we can never get enough Minecraft collectibles.

At the New York Toy Fair, Mattel announced a new line of Minecraft toys that are not only cool,

but they also tie in to the app, and the new game coming out this year. First up are figures related to the highly-anticipated, brand-new Minecraft game, “Minecraft: Dungeons.” Are you hyped? I sure am! To coincide with this new game, Mattel worked with Mojang to produce figures from the new game to tantalize our tastebuds and prime our pick-axes. These new figures show us new mobs, armor, weapons, and characters to look forwards to, giving us a sneak peak into this new blocky world. At $10 each, there’s no excuse! But these guys aren’t the only ones from the new game. Look out for the “Redstone Monstrosity” figure. No, that’s not what I call it when I try and use redstone. This is a new mob, and from the looks of it, boss, from the new game. It’s huge, hulking, and twice the size of the normal figure. At $25, I hope the figure lives up to it’s in-game counterpart. The Minecraft: Dungeons figures come out in Fall of this year.

Next up are figures that tie-in to the mobile app, “Minecraft Earth.” Not only are these figures cool as fork (nice little Captain Sparklez reference for ya), but some of these figures unlock special features in the app as well! The regular collectible figures come with switchable faces, and a stand to display them on. Can I just focus on that Enderman for a second? It’s in mid-disppearance! How cool does that look? The transparent

limbs and purple sparks leading up into the traditionally dark Enderman… this is such a cool figure! The saddled pig looks a bit depressed though… still cute! These lovely figures are $9 each and come out in Spring of this year, so start saving up now!

Still on figures tied in to Minecraft Earth, are the collectible mystery minis that can unlock special perks in the game, and can even give you XP! These miniaturized characters are adorable on their own, and collectible at a mere $5 each. You don’t even need to play the game to get them (although unlocking perks are always nice). Me? I like the little Iron Golem in mid-hit, the Mooshroom, and the sassy Creeper. I hope to get my hands on these when they are released in Spring of this year. 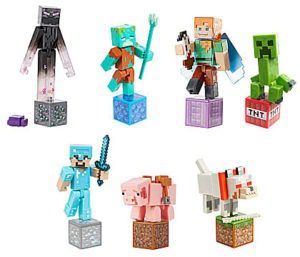 This year, the mystery minis are inspired by Minecraft Earth. I don’t play the game, but I really want to collect these guys. They are too cute 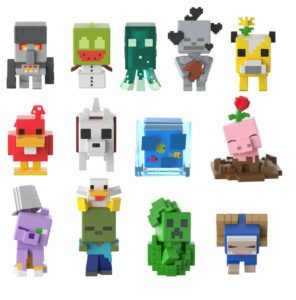 for words. I don’t think we deserve such cute-ness (looking at you Mojang with your adorable Drowned plush!). No, they don’t unlock anything within the game, but they are ready for collecting, at the low price of $3.50 each! Which one do you hope to get? I hope to get that adorable pig in the mud, that Mooshroom Chicken (Cluckshroom? Chickshroom?), the Daisy Cow, and the hatching Creeper (aw man!) when they come out in Spring!

Minecraft is back, and stronger than ever!

We back in the mine, boys!

Mattel Minecraft
Add your voice!Join the conversation on Discord...
Join Our Discord