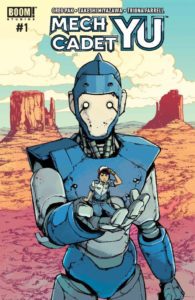 Every four years a group of mech robots fall to earth and bond with cadets. Stanford Yu is a janitor at the academy and hopes to be chosen someday.

It’s a shame that there is such a lack of mech robots in comic books. For American readers, their only option to get their fix is the dysfunctional Iron Man. Luckily for fans of this genre, superstar writer Greg Pak has thrown his hat in the ring. The tone of the issue felt very Voltron, which was perfect. It had all the weirdness of an anime but was still accessible to the general audience.

Stanford Yu was a likable main character, and they set up the “bad guy” well enough that you instantly hate them. Seeing a kid start as a janitor and get chosen by a mech was heartwarming, and if I had one complaint it’s that his rise to the top happened too fast. We get the idea that he and his mom clean up for the entitled cadets, but it would have been nice to see the rags to riches storyline play out over multiple issues. 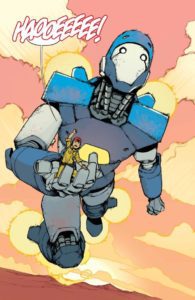 Evangelion is an excellent mech anime, and one of the reasons it stands out is the fact that the suits have a mind of their own. Mech Cadet Yu has a more retro/lighthearted approach to sentient robots, and it has a lot of potential. As fun as it is to read, I hope that darker plot lines start to reveal themselves. The explanation for why robots have been falling from the sky for sixty years could lead itself to something more sinister. There are a lot of directions they can go with the story and still keep it an enjoyable for all comic book.

Takeshi Miyazawa’s art was fantastic. It wasn’t full on Japanese manga, but it wasn’t ultra realistic either. The mechs had a simple design which is much preferred over a robot that becomes too busy to look at. A lot of similar colors were used throughout, I’m hoping the mechs vary in color more in the future and aren’t just single-toned.

The issue itself wasn’t too long, but the world building was so well done that you can’t help but get immersed in the history of these robots and the world.