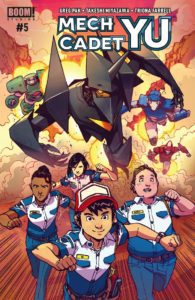 Yu and his friends receive their punishment for disobeying orders and must clean up the mess left behind from the Sharg. They also begin their secret training with legendary Robo pilot Skip Tanaka.

Mech Cadet Yu has done so much in so little time. Only five issues in and the series has already built up some wonderful characters and a fun exciting world for them to live in. This issue continues the world-building with us seeing what is essentially a Robo clean-up crew. The kids may have disobeyed orders but they defeated a Sharg and saved lives, so them getting punished seems harsh. But it did allow for Stanford and his mother’s bond to be highlighted. Their talks are always sweet and their perpetual optimism and naïveté is one of the best aspects of the book. Greg Pak has written such lovely characters that you just want to root for. Also, the new layer being added to Skip is an intriguing one. An idol falling from grace may have a powerful effect on Yu. 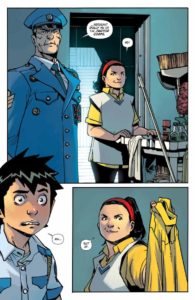 I always appreciate a cool looking kaiju, and the Sharg are some gnarly looking creatures. Takeshi Miyazawa has such an amazing style that both pays homage to past mech stories while still feeling fresh. It has that retro look to it but I’d be able to pick out one of his Robos from other mechs. It might just be the version of comic book I read, but the colors seemed different in this issue. They looked a little darker and more vibrant. If when the characters were in their janitorial clothing they popped. The setting. Didn’t really change much this issue so I’m not sure where the perception of changes came from.

Outside of the one big reveal toward the end of the comic, this issue was meant to show the aftermath of their battle and launch a few new mysteries. The characters are just so darn likable you really don’t need much more than that anyway. I love everything about this series and hope it continues to move forward at a decent pace and not get dragged down by filler. I am curious to see just how serious Greg Pak will make this series because it is very lighthearted right now, but has the potential to get darker. As would be expected given the fact that a war is just beginning. So far it is striking a perfect tone.