I was so excited for Mera to get a solo series and issue #1, A Queen in Exile blew it out of the water (pun). In all seriousness, the very beginning was such a surprise! An Atlantian on land!! Living the life of an everyday human? Married with a stepson? He’s in love and can’t believe he’s decided to stay on land.

Then we see a beaten up Mera on dry land. She knows this is her fate and just as it was in her childhood, she doesn’t get much of a say in her destiny. She should be with Arthur. Married in their own paradise. In this comic, she was meant to murder him, instead fell in love with him but exiled to dry land.

She’s injured with magic and must recover on dry land. We find out she can’t even breathe underwater when she’s brutally attacked by The Eel. He has the same power as hers, aquakinesis. They can make hard water into a solid. Like a bullet. He sees her weaknesses. Once she’s drowning and in a half sleep state, Mera remembers she has more power than these and defends herself. Her fellow ocean dweller and friend Tula is supposed to take care of her and reminds her that until the magic wounds heal, she cannot keep up fighting. Mera has to summon the Justice League to keep the Eel in custody. He was hired to kill her. Who was after her they asked? Well. It could be anyone. She is now the Queen of Atlantis. 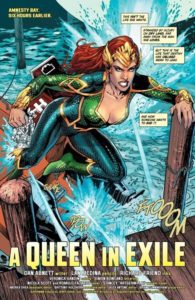 Part of Mera’s mission in Exile while she heels,is to keep the people up here from interfering with the civil war in the ocean. She even warns the Justice League to stay away. It looks like she’s going to get the help of another exiled Atlantian.

I cannot say enough about how much I enjoyed issue 1. When I heard about a Mera solo all I could think was, I hope it’s well written and it does the character justice. Abnett has exceeded my expectations in this aspect. The story was totally unexpected. She’s a Queen, but not anywhere near the way you’d expect her to be. The rules have changed for her, Aquaman and Atlantis. The characters and backdrop are drawn perfectly. She is Mera through and through. Stubborn yet true to her cause. Arthur doesn’t want to be king nor does she want to be queen. Mera is so loyal, she’s willing to sacrifice all of that. She’s perfectly written. I can’t only hope the films represent her as well as this comic has so far!

Aquaman comics DC comics mera reviews
Are you an Insider?News, reviews, & updates are just the beginning.