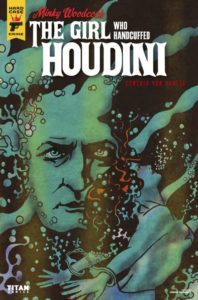 Minky has fallen deeper into the lifestyle and also her role as a private investigator, but is it really that anymore; or has she really became the person she was pretending to be? At this point, she doesn’t even resemble the spunky woman who just wanted to prove herself as a detective. She was warned. The dark Spiritual underworld and Harry Houdini’s womanizing tactics may be taking their toll. 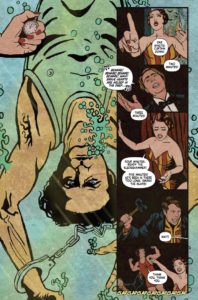 The previous issue left me in suspense as we see Bess Houdini, the famous Houdini wife, hiring Minky as his assistant and P.I. to spy on her husband. She had fired his last assistant over Harry’s constant cheating. This issue escalates very quickly! There’s definitely a conspiracy. They say a lot of people want Houdini dead, is it more than that? I’m even speculating if her father’s lifelong friend had other motives? The dark side of Minky is further explored. I can see why she’s asked if she’s drinking constantly. Her surroundings and role as a double private investigator begin to make her feel powerful and aroused. She begins to bleed sexually. I believe she’s actually falling into his trap and totally forgetting her original assignment. That’s one of my interpretations. She begins to have more questions about her mother’s death and continues to fall further into a downward spiral after doing a certain trick for her “employer”. Is the Spiritualist Margery having an actual effect on her? I hope the next issue has these answers. Spoiler free…the end was something that I would’ve never seen coming. A totally and utterly perfect twist ending and for only a SECOND issue! I’m again stuck in suspense waiting for the next.

Have you seen this:
Oh 'Missy' You're So Fine - Graphic Novel Giveaway!

Just like Issue #1, the art and tone of Minky Woodcock, The Girl Who Handcuffed Houdini is absolutely stunning and stimulating. The style of writing is completely her own. It’s not like any comic I’ve read. It’s a historical fiction with a total comic book, science fiction, twist. It’s very sensual, however during some of the sexiest panels in the book, it shows quite possibly the most psychological aspects of the character. I am so glad I was randomly drawn to the cover art of the first issue. It was definitely the perfectly pleasant surprise!