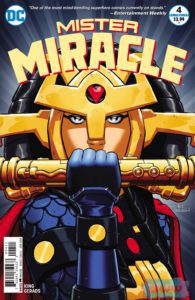 Mister Miracle confronted Orion about his behavior since becoming Highfather and it did not go well. Now, Scott Free is accused of being an agent of Darkseid and must stand trial.

Tom King and Mitch Gerads are creating something special with this comic book. It has found a way to be different and unique yet still faithful to New Gods. One of Tom King’s strengths is making the most mundane activity entertaining, and I mean that with all due respect. Mister Miracle’s trial took place in his living room, and never portrayed a sense of dread or urgency, but was still an intense sequence. It’s every character’s non-chalantness to major events that make it feel almost dreamlike. The dark humor fits in so well. Whether it’s anecdotes about life on Apokolips or eating carrots out of a veggie tray, King knows how to create and break tension leaving a reader feeling unsure about what comes next. It’s just a weird but wonderful comic book.

Have you seen this:
Godzilla Vs. Kong (Review) 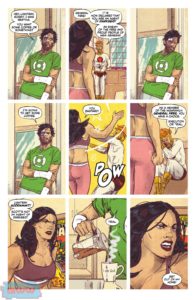 There is a lot to like about Mitch Gerads’ artwork. Mister Miracle is such an odd and surreal book, and the art has a lot to do with that. This series benefits from not having a cookie cutter mainstream superhero style look. The nine-panel grid is used to perfection, allowing for humor or story buildup. One of my favorite things about the art is how much emotion you get out of each character. You see Scott Free disconnected with his surroundings for the most part but as this issue progresses he becomes more unstable. Toward the end when Orion is questioning him, each panel has a different facial reaction to individual questions, which lead up to Mister Miracle finally snapping. It was just fantastic storytelling, something I’ve seen a lot of in this series.

Between the writing and art, this issue felt like a depressing New God’s sitcom in the best way possible. The whole story took place around a single couch, and the aloof way each character goes about something that winds up tragic adds some levity. While Big Barda continues to be a highlight in each issue. Her smacking Lightray around was pretty funny, but underneath it all something seems off about how she is going about her husband’s battles, both physically and emotionally. At some point, you have to wonder if anything that has taken place in this series has actually happened.

Mister Miracle #4 will easily be one of the most interesting comic books you’ll pick up at your shop this week.