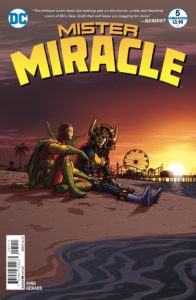 The new Highfather, Orion, has sentenced Scott Free to death. So Mister Miracle and Big Barda spend their last day on earth together on a date.

Every issue in this series feels more and more like a dream. With small hints of waking up sprinkled throughout. This felt more like a tip of the hat to Jack Kirby than it did a goodbye to Scott Free, right down to the way “true believer” Funky Flashman was used in this issue.

The couple’s final date was sweet, depressing, sexy, and borderline morbid. Tom King and Mitch Gerads are building to something special here, and they’re making it look effortless. So far, character’s reactions to events have been odd, to say the least. It almost doesn’t seem real, that was until the ending of this issue. A moment that spoke very true to the character. There is something seriously wrong with Mister Miracle and Orion, so Big Barda had to be on edge. 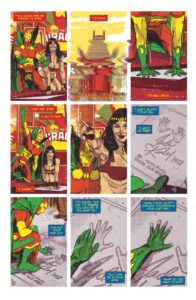 What more could be said about Mitch Gerard’s brilliant work on this series. His use of nine panel pages has been so clever and feels fresh, especially compared to every other comic book on the market right now. Emotions are captured so beautifully in each individual panel, I never want to see this character done another way again. Every moment matters in this comic book thanks to the artwork, even the more intimate moments. And there were plenty of those in this issue.

It feels like Tom King has bold plans for Mister Miracle and some of those things are finally taking shape. This issue was depressing, which happens when someone is sentenced to death and must enjoy his last day on earth. There were also a few pages at the beach that made me feel like I was back in college listening to a lecture, but everything was so well-crafted I just can’t get enough of it. As previously stated, this has all felt like a dream, and the ending to this issue was the first tangible thing to happen. It has me excited to see the aftermath of Big Barda’s decision.

Have you seen this:
An Unkindess of Ravens #2 (Review)