Orion has ordered the execution of Mister Miracle, but Big Barda and Scott refuse to go down easy. They take the fight to New Genesis and the new Highfather.

Mister Miracle is a series that mixes the dramatic, the funny, the sad, and the surreal oh so well. The nonchalant conversations that take place during intense situations are a staple to the series. The best part is that they almost always pay off, either with a huge surprise or something funny. Tom King does an excellent job of keeping readers off balance by lulling them into a false sense of security. Even as Big Barda and Mister Miracle shred through Orion’s guards, I was intensely focused on the conversation about remodeling their apartment. As expected it pays off in a big way, but the journey through New Genesis was captivating even without it. Amazingly, that wasn’t even the most shocking part. The reread the final few pages multiple times. 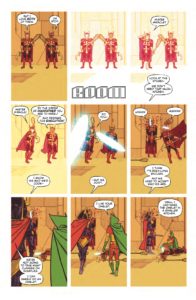 Mitch Gerads had a lot to work with this issue and he delivered a phenomenal issue. He toys with the nine-panel grid format like no one else. Despite a lot of the action taking place in such a small space, the battles still feel big and exciting. Barda and Scott have vastly different fighting styles and Gerard’s displays them in a fun way. His artwork is innovative and carries a lot of the quieter sequences, so his contribution to the success of this comic book should always be noted. My favorite moment from the series is probably still the battle sequence when Mister Miracle takes on Apokolip forces. But the journey through New Genesis in this issue is right up there. Visually, it was just wonderful storytelling.

This issue kept ramping up and by the end, I couldn’t wait to go relive it again and again. We don’t know yet where this series stands in the context of the DC Universe continuity, but that ending is sure to get a pop from any reader. This is one of the best issues in what is turning out to be a classic series.