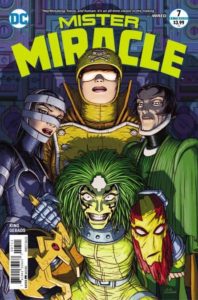 Big Barda is ready to give birth to the first New God born on earth. The Female Furies show up to the hospital to welcome the baby despite being on opposite sides of the war of the new Highfather, Mister Miracle.

On social media, writer Tom King posted a picture of him holding his first newborn child as well as a second photo with all three of his children. I never expected his Twitter post to be the perfect precursor to the latest issue of Mister Miracle, but that’s exactly how it turned out. Again King brilliantly mixes the normal moments of life with the extraordinary issues of being a New God. Something simple as family and friends visiting the hospital becomes a tad more awkward. Nothing has humanized the New Gods more than seeing two of them stress out on the birth of their child. This series continues to find new ways to suck readers into Mister Miracle and Big Barda’s journey. 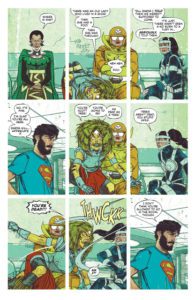 I can tell Mitch Gerads had a lot of fun with the Furies. The way they continually bled over to the next panel was a lot of fun. This series is really pushing the nine-panel grid to its limit, also seeing these warriors sitting patiently was pretty funny. It reminds me of the story about DC Comic editor’s rule of not wanting Batman to ever be shown sitting down because “Batman doesn’t sit.” There is a bit of awkwardness that comes with a fully-costumed badass kicking back and chilling. That quirkiness fits the tone of this series. The artwork does an amazing job of keeping readers off-balance and unsure of what comes next despite repeating a lot of panels. It’s just so well down, the art is damn near perfect.

By the end of the issue even I was stressed out about the baby being born. King was able to tap into what I assume was real-life experience of anxiety quite well. What effect this will have on the overall story of the New Gods’ war is unknown, but it kept you focused on the moment and not what happened before and what’s to come next. Though the aftermath of the insane ending to the last issue is subtly referenced, I wish they’d have gone into it more. But I love everything about Mister Miracle right now because there seems to be a clear-cut plan and readers are just along for the ride. I don’t remember a series being this immersive before. It is truly one of the best DC Comics series in recent memory.

Have you seen this:
Dark Nights Death Metal #3 (REVIEW)

mister miracle Mitch Gerads Tom King
Are you an Insider?News, reviews, & updates are just the beginning.