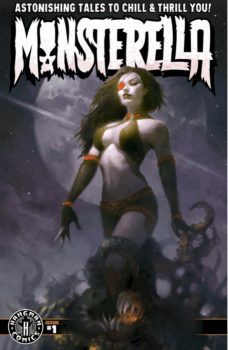 Monsterella. If the name alone doesn’t sell you right away; seeing this series of anthologies that are being Kickstarted by Hangman Comics ought to do the trick. Produced in the vein of black and white anthologies of the 1970’s; this series is a throwback to the early days of Vampirella and Warren Comics, yet also a trendy rendition of more modern anthologies like Dark Horse Presents.

Anthologies can be tricky. In essence, it’s a collection of short stories; leaving varied room for quality in story and art. When an anthology is done wrong is a jumbled nightmare, but when it’s done right you end up with multiple takes on a given character or subject. Thankfully Monsterella falls on the side of the angels with these two offerings.

Issue one introduces our hostess and titular character Monsterella, real name Montrossa Rella; a warden to the prison planet, Doomru. The main story in the first issue centers around a prison break, the arrival of human astronauts, and Monsterella’s fight with some badass alien creatures. It’s as wild and crazy as it sounds. This isn’t a serious comic, it’s meant to be babes, monsters, aliens, action, and horror…Think back to the glory days of Heavy Metal and you’ve got the flavor of this title.

The stand out segment from the other ancillary tales is by far “The Stork” by creator Josh Kully. This short story is the stuff of nightmares and one of the most haunting bits of pop culture I have read in a long time. The visuals are creepy, the mood is dark, the words poetic and the entire tale sits with you long after you have finished reading. If there was ever a tale that I would mark as the successor to Edgar Allen Poe’s “The Raven”, this would be it. Chilling stuff!

Issue two is a continuation in the same vein of storytelling with more monsters, more horror, more awesomeness. Reading these issues back to back helps you understand just how committed Hangman is to delivering on the reader a good time and a fun comic. There is more than enough here to see this series continue on as a regular series.

While the art and writing harken back to the 60s and 70s, there are minor hiccups here and there. This is an Indy title so I give a little room when it comes to art that is a little stiff, figures that are not proportioned correctly, and writing that comes off as clunky. This is part of the charm. The comic has just as many rough edges as the main character.  This is made in the spirit of grungy rock-n-roll, midnight matinees, and scary B-movies. It’s not meant to look polished and professional. That’s not the point. It’s all about the creators scraping and clawing their way to readers to bring them a gem.

Have you seen this:
Master of the Universe: Revelation Part 1 (Review)

This is where crowdfunding comes in. This is a collection of young talents that are just starting their journey into the industry; while some have experience others are brand new to the game. This is really Indy comics at its finest and one of the shining examples of how fans have helped creators not only fulfill a vision but brought something back into the medium that has been lacking…fun.

* Issue three is currently seeking funding and you can help! Just go to Kickstarter, type in Monsterella or just click HERE!