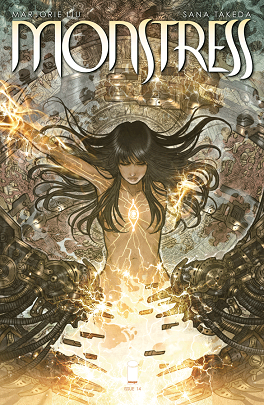 Things slow down a bit in the new issue of Monstress #14 as Maika prepares to go help reactive the Pontus Shield so that the city of Potus would remain safe as the war is set to go off. Outside of a war starting, Maika is soon going to have to worry about another person that is on the hunt for her as we caught up with Destria from the Cumaean order. We meet her commander and she is pleased with the news of her failure capturing Maika. This is the same person we saw in the last issue who murdered the queen and she now has stolen a mask fragment. When it comes to characters in the issue, I would say Kippa is the highlight this time. We find out that many refugees are foxes like her and still hopes that her aunt escaped from the slavers that had captured them.

The most notable thing is about her now is how she is seemingly growing to accept the normality of her situation when seeing these monsters and people in tragedy. She’s no longer afraid of the awakened creature Zinn that spawns from Maika’s body. The refugee’s shown I believe will also come into factor later on as political points with the city because it is definitely possible for the city to become overcrowded due to the war and when that happens, we could see some very unhappy and hostile people create bad situations for everyone here. Maika is still the little smart mouth like always and you can see how she is tired of all of this, wanting it all to be over. I think the worst thing about her situation is how someone always wants to use her for something and she can feel like she can trust anyone around her. Even with all the good intentions given to her regarding powering up the shield, she’s still caught by surprise on the way it works which leads everyone in shock with what is presented to them.

Sana Takeda also continues to do tremendous work with her art in this issue. This issue gave 2 great single page splashes where with very little words, the art shown was able to express the experience these certain characters were having in their moment from agony, pain, fear and one with power, energy, and horror. Even in a grim-looking world, Sana is still able to show a bright scene easily with her work on colors. The page where Kippa is at a garden is so vivid and is much needed to help keep a world of monsters looking so dark.

Things are only getting started right now with all of the political party movements going on for the coming war. We don’t get too many forward movements out of our characters outside of Kippa but what we do get still progresses along well enough to keep you interested in to see how things are going to play out, especially with the way this issue ends.