Moonlighter is one of those games that I really love but I want more out of. The systems and formula had me addicted while some of the execution, with combat in particular left me a little underwhelmed. The setting and concept are brilliant in that you play as a lonely shopkeeper who has to raid dungeons for goods to sell in your shop. The game is extremely straightforward in laying out this premise for the player and it’s clear from the start that this game is all about the gameplay and the grind! 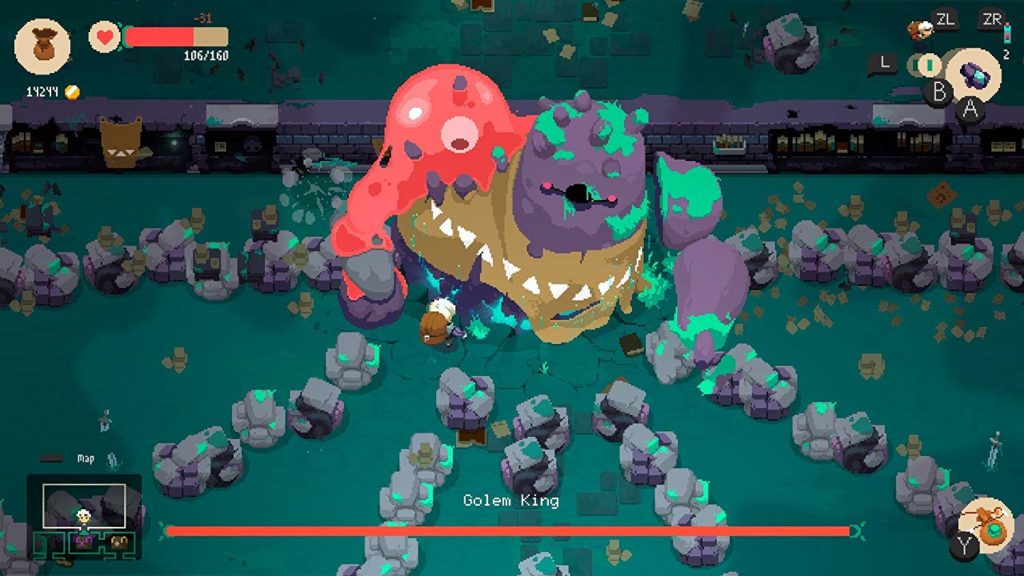 That’s not necessarily a bad thing because for the most part, the grind is quite engaging and fun. Finding rare items and goodies to sell or use is a blast. Moonlighter nails exploration and looting in a big way. Unfortunately that doesn’t really carry over to combat and there’s a lot of combat. It all just feels basic and sometimes it can even feel a bit sloppy. The old-school take on action rpg controls is  cool for a while but I wanted so much more out of the combat, which is a pretty prominent element of the gameplay. That being said, the rest of the game is enchanting enough to keep me fully engaged.

The look of this game is a healthy cross between top-down Zelda and Bastion and I love that. There are only 5 dungeons and the look doesn’t really change all that much but the simplistic cartoon fantasy feel really worked for this title. The music is absolutely excellent and takes this game to a new level all on its own. I used headphones as much as I could as I was playing this while travelling and more than once, closed my eyes on the plane just listening to the level music play in my game.

There are some good hours to put in this as the dungeons take several return trips to complete and running your shop operations as the game progresses becomes an addicting task all on its own. Moonlighter crosses the dungeon crawler genre with a business sim in some of the most interesting ways you could imagine. The difficulty is really only based on your patience for the grind but the shopkeeping element does a lot to help it all go down nicely. Moonlighter really has the perfect combination of super shallow story and deep addictive gameplay that works great on a console like the Switch!