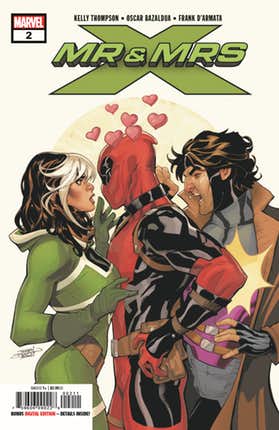 How can you make a terrible honeymoon worse? Run into an ex of the bride or groom. The only thing that can make it worse: Wade Wilson is the ex. Though he’s not really an ex of Rogue (they made out a bit), but Deadpool has strong feelings for her. So even if you remove the fact that he’s the most annoying person in the galaxy, he’s one of the last people Gambit wants to deal with in general, especially on his honeymoon.

Although it sucks for Rogue and Gambit, it’s a great addition for everyone else. That baggage adds some extra emotion to the fight with Deadpool – who pretty much just takes a beating throughout the whole issue.

Integrating Deadpool was a good decision by Kelly Thompson. Though at first, I wasn’t fully certain why he was going after this egg that Rogue and Gambit are ordered to retrieve, he always adds another layer to any story he’s involved in. Plus, he’s always a lock for great banter.

As much as Deadpool initially feels like a filler, I think he’s going to play a bigger role in this mini-series. He alluded to the egg being worth $100 million. At one point he also says to Rogue, “I’m here to get my egg.” When Rogue questions him on it being his egg, Wade responds, “Yeah. It’s mine.”

There’s one thing that would lead you to believe it’s not his egg, but I think it’s Wade intentionally trying to throw Rogue and Gambit off.

Another outstanding job by Thompson in this issue. She has a firm grasp on this relationship and seems to really understand them as individuals, too. She also elected to not have Deadpool talk to the audience at all. I like that call. This isn’t about him. Deadpool is there to add to the story, not take over (though I guess he did kind of take over this whole review).