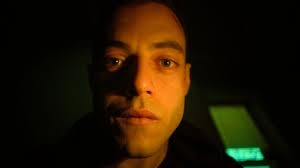 “That’s the only way to protect myself, never show them my source code…close myself off…create my cold, perfect maze, where no one can find me.” -Elliott

Episode three is the first time the show opens with a voiceover other than Elliott’s.  We hear the cold, precise, rehearsed echo of Tyrell Wellick’s voice as the screen dissolves to show a perfectly, framed shot of the New York City streets in the early morning.  Tyrell runs by and we are led into a montage of his morning routine.  The sharp cuts between frames are staccato in nature, producing a feeling of detachment and coldness throughout the opening. “Warm it up, don’t be a cold

robot,” shouts Tyrell at his own reflection.  The ambitious business man practices his pitch to be promoted to Evil-Corp’s CTO in front of a mirror.  Note, the mirror is multi-faceted along the edges, attempting to reflect all aspects of his character. Then there is a direct to camera shot, as we view Tyrell from the mirror’s perspective.  Again, sharp cuts are shown overlapping, one another as Tyrell debugs his self-presentation.  The whole sequence presents Tyrell as a man obediently, abiding by the rules of society.  His appearance of normalcy, beneath the guise of perfection, authorizes him to be viewed as a successful man in this reality.

Have you seen this:
Everything You Need to Know About the Scarlett Johansson vs. Disney Lawsuit

“The un-wrinkelage in the otherwise neat reality, I’ve created over the years.  I’ll never let myself slip again.”-Elliott

Tyrell’s opening sequence includes his failure to obtain the CTO position.  This
forces Tyrell to adapt, evolve, and pursue an alternative route on his path to success.  Meanwhile, Elliott finds himself free from fsociety and embraces the normal life.  He even agrees to attend a work dinner party, and attempts a

relationship with Shayla. The scene where she shows him, her “bug”, subtly tethers Shayla and Elliott together.  His victory is short-lived as memories of his father’s death resurface and cause him to retreat back home to the underground.

“A bug is never a mistake…it represents something bigger, an error of thinking… that makes you who you are.” -Elliott

Both Elliott and Tyrell failed, while trying to play the game according to society’s rules.  Tyrell returns home to his wife after having had sex to gain access to information about the new CTO.  He finds his wife in bed, and we see them prepare for some BDSM activity.  The preparation for this type of sexual act, authorizes Tyrell to reclaim control, dominance, and power over his life. Cut to Elliott’s return to the fsociety’s arcade hideout.   Note: Techno-pop music played during the Tyrell’s opening scene, while classical music sets the mood for Elliott’s ending act.  Elliott takes his rightful spot

at the head of the table.  His peers circle around him, as the camera slowly  zooms in on his face.  This final shots framing mirrors the opening, as computer towers border both sides of the frame; much like buildings on both sides of a street.

Did both characters truly fail in their attempts to be normal?  Are they really that different?  Tyrell and Elliott are just two men, both trying to protect their “perfect mazes,” at all costs.