Murder, Revenge and Tragedy in the Southern Heat in Loose Ends #1

From the first pages of this book you can tell two things, Sonny is a man with a lot of problems and none of them are going to get resolved neatly. Sonny used to run drugs back in the day and he’s seemingly retired to a lonely little trailer in the backwoods. He’s living there content to be away from everybody and everything until he’s confronted by an old colleague named Rej who has a proposition for him that is literally a matter of life and death. As Sonny sits in his car parked in front of a pay phone, he orders a bucket of beers from the pretty little waitress named Cheri as he contemplates whether or not he should talk to the bartender Kim. 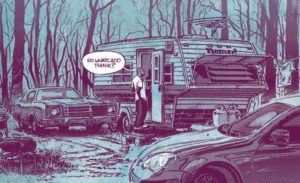 As the regulars in the bar get drunker and Sonny imbibes a little liquid courage himself, an ominous mood starts to take over as Kim confronts Sonny, Cheri gets assaulted by two of the regulars and a drunken Sonny starts a series of events that inevitably lead to tragedy. Meanwhile, Rej gets into it with a couple of dirty cops who seem to know a lot more about his activities than the low-level drug runner is comfortable with.

This first issue does a really good job of setting the pieces on the board as the game plays out in front of the audience. Jason Latour has introduced a cast of characters both sympathetic and tragic without pandering to the reader. This is a taut thriller that is reminiscent of early Coan Brothers and Quentin Tarantino. No one is innocent, no one is good and everyone is the architect of their own tragedy. Chris Brunner’s art and Rico Renzi’s colors are slick and evocative. The characters are drawn with a level of exaggeration that is appropriate to the mood of the story and the color shifts between moments of calm and violence are subtle and engaging.